France now has a socialist president

This should be interesting.  I know nothing about him, but read this in the BBC story today:


He said he would push ahead with his pledge to refocus EU fiscal efforts from austerity to "growth". "Europe is watching us, austerity can no longer be the only option," he said.  Mr Hollande has called for a renegotiation of a hard-won European treaty on budget discipline championed by German Chancellor Angela Merkel and Mr Sarkozy.

The Socialist candidate has promised to raise taxes on big corporations and people earning more than 1m euros a year.

He wants to raise the minimum wage, hire 60,000 more teachers and lower the retirement age from 62 to 60 for some workers. 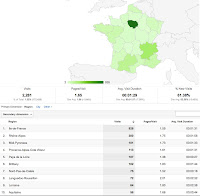 There is an extensive summary of his other positions at Reddit.

TYWKIWDBI gets several thousand visits/month from readers in France (graphic embedded at right).  I'd like to hear your comments re this development.  I've seen commentary from business journals and political journals.  Just the word "socialist" is setting off alarm bells among certain American persons and groups.