Is an 8-hour sleep a modern artificial construct ?

Excerpts from a long article at the BBC:


In 2001, historian Roger Ekirch of Virginia Tech published a seminal paper, drawn from 16 years of research, revealing a wealth of historical evidence that humans used to sleep in two distinct chunks.

His book At Day's Close: Night in Times Past, published four years later, unearths more than 500 references to a segmented sleeping pattern - in diaries, court records, medical books and literature... 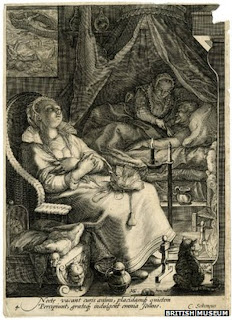 Much like the experience of Wehr's subjects, these references describe a first sleep which began about two hours after dusk, followed by waking period of one or two hours and then a second sleep.

"It's not just the number of references - it is the way they refer to it, as if it was common knowledge," Ekirch says.

During this waking period people were quite active. They often got up, went to the toilet or smoked tobacco and some even visited neighbours. Most people stayed in bed, read, wrote and often prayed. Countless prayer manuals from the late 15th Century offered special prayers for the hours in between sleeps...

Ekirch found that references to the first and second sleep started to disappear during the late 17th Century. This started among the urban upper classes in northern Europe and over the course of the next 200 years filtered down to the rest of Western society.

By the 1920s the idea of a first and second sleep had receded entirely from our social consciousness...

Today, most people seem to have adapted quite well to the eight-hour sleep, but Ekirch believes many sleeping problems may have roots in the human body's natural preference for segmented sleep as well as the ubiquity of artificial light.

This could be the root of a condition called sleep maintenance insomnia, where people wake during the night and have trouble getting back to sleep, he suggests.

I've requested the book from the library; if it's good, I may review it in a future post.

Update:  I finally did read the book; it's very interesting, very comprehensive, but seems to me to be sort of a compilation of a thousand anecdotes rather than a tightly constructed report, so I haven't added it to my list of recommended books.   The book covers many aspects of the sociology of night, not just the sleep patterns discussed above.  Re that subject matter, a hat tip to Alex, who sent me a link to an essay at The Age which offers an extended discussion of segmented sleep, as reported in the book:


"By segmented sleep, I am referring to a pattern whereby individuals typically slept in two phases of perhaps three to 3½ hours each in length bridged by an intervening period of wakefulness. The transformation to our much younger, modern mode of slumber took place gradually and erratically over the course of the 19th century in Western societies."

Though it's an alien concept to us today, references to two sleeps can be found as far back as the Old Testament and Homer's Odyssey, and, more recently, in Don Quixote and Charles Dickens's Barnaby Rudge. The period between the two wasn't always a solitary affair, with people gathering to talk, have sex or visit the neighbours. But, the introduction of affordable light sources – from candlelight to public oil lamps – blurred the distinction between daytime and night-time activities and sleep patterns soon followed...

"The social and cultural factors that reshaped sleeping patterns are called nocturnalisation," Kofolsky told me. "Nocturnalisation, defined as the increasing social and symbolic uses of the night, began to reshape sleeping habits, meal times, and all other structures of daily life beginning around 1650. Just as some Europeans at this time sought wealth, prestige, and power through colonisation of space, so too Europeans began to colonise the night, expanding their daytime activities into the night while developing new uses for lighting and darkness and leading to a compression of the first and second sleep into one block."

Over the course of the next 250 years the trend filtered throughout the rest of Western society and by 1920 the concept of the first and second sleep had been eradicated from our collective memory...

Reposted from February 2012 to add the update.