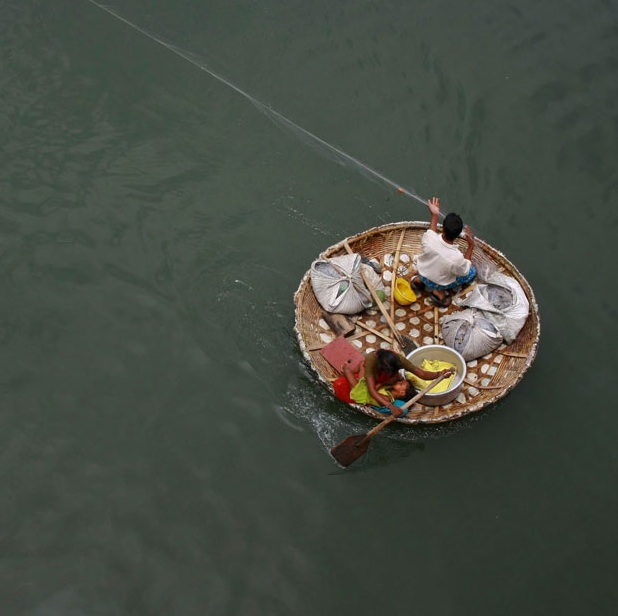 A fisherman casts his net as his wife paddles a boat while breastfeeding her child, in the waters of Vembanad Lake, in the southern Indian city of Kochi.

This photo (credit Reuters, via the Telegraph) reminded me that this ancient pattern for a boat is still in active use today.  A couple years ago I posted this video of the construction of a coracle-

- at Neatorama, along with these comments:


This video incorporates footage from 1935, in which Irish craftsmen build a coracle from willow and an ox hide, then use the craft to set their nets in the River Boyne. One has to admire the skill and experience required to propel a keel-less craft in a reasonably straight line. As the narrator notes, these river craft are related to the larger currachs that were capable of substantial ocean voyages.

The Irish documentary notes that the pattern goes back to the Bronze Age, but there are suggestions that a similar shape may have been used for Noah's Ark (or for the prototypic vessel that gave rise to Noah's Ark).  A Sumerian tablet dating from about 1,700 BC gives directions for the building of a craft to rescue people and animals from an impending flood, and the description is for a circular craft:


In his translation, the god who has decided to spare one just man speaks to Atram-Hasis, a Sumerian king who lived before the flood and who is the Noah figure in earlier versions of the ark story. "Wall, wall! Reed wall, reed wall! Atram-Hasis, pay heed to my advice, that you may live forever! Destroy your house, build a boat; despise possessions And save life! Draw out the boat that you will build with a circular design; Let its length and breadth be the same."