A teenager was the subject of a rare "Saxon bed burial," as is nicely detailed in the video.


The girl, aged around 16, was buried on an ornamental bed -- a very limited Anglo-Saxon practice of the mid to later 7th century -- with a pectoral Christian cross on her chest, that had probably been sewn onto her clothing. Fashioned from gold and intricately set with cut garnets, only the fifth of its kind ever to be found, the artefact dates this grave to the very early years of the English Church, probably between 650 and 680 AD.

Here's a photo of the "incredibly rare" gold-and-garnet pectoral cross: 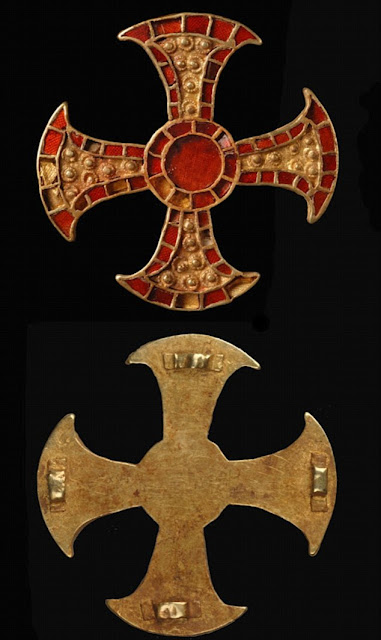 All of the bed burials that have been found were of high status people, primarily women, and she was found with particularly valuable grave goods. Most notable is the gold cross, 1.4 inches square, inlaid with red garnets in the same style as the weapon fittings from the Staffordshire Hoard. The four other pectoral crosses that have been discovered in Britain were all pendants, hung from a loop on the top arm. This one has loops on the back of each arm, three of them rubbed shiny, indicating that it was sewn into an article of clothing and worn daily.

Further details re the findings and re early Christianity in Britain at The History Blog.