Chess in the Middle Ages 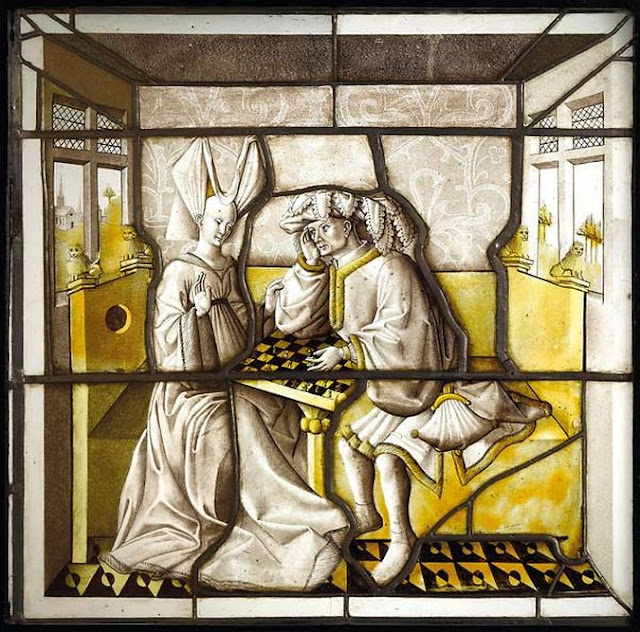 'The game of chess as a metaphor for love ritual, permeates the culture of the late Middle Ages in literature as in the figurative arts...

Both players wear stylish clothes and extravagant hats, as was fashionable in the fifteenth century. The lady wears a long robe of cloth lined with fur. She shaved the top of the forehead, as elegant women usually did in the early fifteenth century, and wears a horned headdress, so-called “split roll”. Her partner is wearing a beautiful chaperone that forms a turban on his head. The gray and yellow - two favorite techniques of painting on glass - are employed on a very pure glass, of varying thickness, sometimes very thin. Its remarkable quality of execution is also one of the best artworks of the Lyons area from the mid-fifteenth century.’

Text and image via Miss Folly.

I'll use this occasion to bid a fond farewell to "Miss Folly," whose tumblr has for several years been a source of fascinating material.  From her farewell post:


This post will be the 13,000th post. It will also be my last. It has been difficult to balance all my responsibilities and other interests. Yet this is one of many art blogs on Tumblr - some much better than mine, I think, and posting works of art I have never seen before! Believe this! I am truly grateful to learn more about art from other Tumblrs. And, although I will no longer post, I will poke about from time to time to see what I can continue to learn : ) Ah, and, should someone wonder, I will not be starting another blog.

I think blogging should be an act of love. Full stop. It is not, contrary to some, a matter of how many people visit and follow a blog.

A quick search of TYWKIWDBI reveals over 20 links to her tumblr, generally for "things I didn't know" and including some truly remarkable images.  I'm posting four items from her tumblr today as a way of saying farewell.

She does not indicate whether her tumblr will remain up, or whether she will be taking it down.  I hope it stays in place, because it has some truly wonderful material.  If you're not familiar with the site, you should visit it today:  Miss Folly.