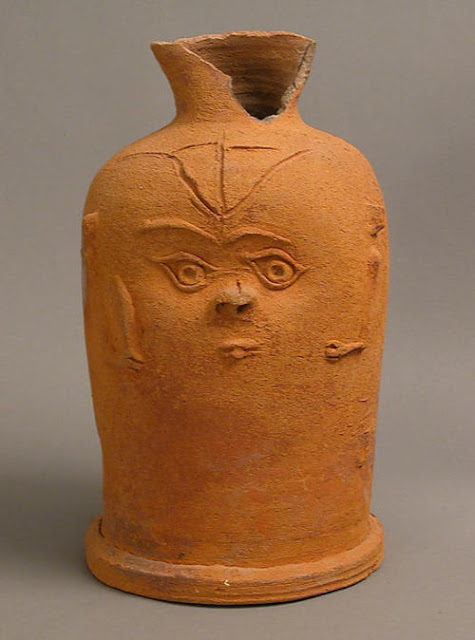 4th - 7th century, made in Kharga Oasis, Byzantine Egypt.  From the collections of the Metropolitcan Museum of Art.

Addendum: A hat tip to Skipweasel for identifying this as probably a "bes jar, " described at The Scribe as follows:


One of the most common depictions of Bes were jars decorated with his face. If a child were ill, milk would be given to them in one of these Bes jars. It was believed that the milk would turn to medicine and protect the child. If the child didn’t get well though, of course a doctor would be called. It was then not uncommon for the physician to offer medicine out of a Bes jar. The final form of Bes jars came during the Roman period. Bes jars were no longer delegated to only children. Soldiers, believing that they were vulnerable, just like a child, often drank their beer rations out of Bes jars in hopes of protection from attacks.

With pix at the link and more with a Google Image search.