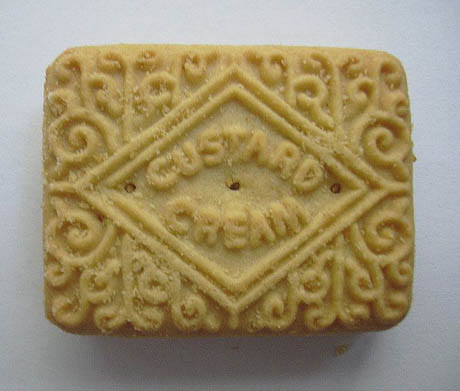 A column at The Atlantic provides a history of the Oreo cookie, which will mark its 100th anniversary this coming year.  Lots of info there re the design and history, including this interesting morsel:


The practice of punching holes in biscuits is known as "docking," and has been done by bakers for centuries in order to prevent uneven puffiness and promote flat crispness. According to British cookery writer Elizabeth David, a pre-mechanization docker was "a dangerous-looking utensil consisting of sharp heavy spikes driven into a bun-shaped piece of wood."

The etymology of the word docking appears to be unknown:


According to the Oxford English Dictionary... the origin of this word as it relates to biscuit-making is unknown. The first use of this term in print is dated 1840. In 1875 "The biscuit was then docked, that is, pierced with holes by an instrument adapted to the purpose...A stamping or docking frame..."

The image at the top is a painting of "An hexagonal ship's biscuit, painted with a picture of a warship within a lifebelt inscribed 'H.M.S. LANCASTER'," via the National Maritime Museum.  Beneath that is the modern custard cream.