Sand has always been a valuable commodity in the construction business.  I remember decades ago reading (but not following) the investment advice of Peter Lynch, who recommended investing in sand and gravel companies because transporting the materials long distances was prohibitively expensive, so local companies have virtual monopolies.

Today I learn that sand is also a necessary component for fracking technology, so immense "sand mines" are being developed, with a variety of local environmental complications: 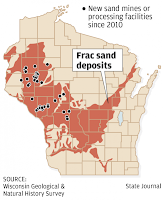 A controversial natural gas mining technique called "fracking" is creating a boom in Wisconsin sand mines with more than 20 new mines proposed, including some as large as 500 acres or more.

While the mines bring jobs, they also bring dust, traffic and other problems the state Department of Natural Resources and local governments aren't prepared to deal with... "The state is woefully unprepared for this," said state Sen. Kathleen Vinehout, D-Alma. "We're regulating sand mines like we regulate gravel pits. There is a big difference between a one-acre gravel pit and a 900-acre sand mine."

[The demand for sand results from] the increasing use of a natural gas mining technology called hydraulic fracturing, in which deep wells are sunk in shale and a mixture of water, sand and chemicals is pumped under pressure into the rock, fracturing it and freeing the gas. The sand granules, because they are round and made of hard quartz, then keep the fissures open and the gas flowing.

More at the Wisconsin State Journal.