"Genuflecting" strychnine plants can bury their seeds nearby 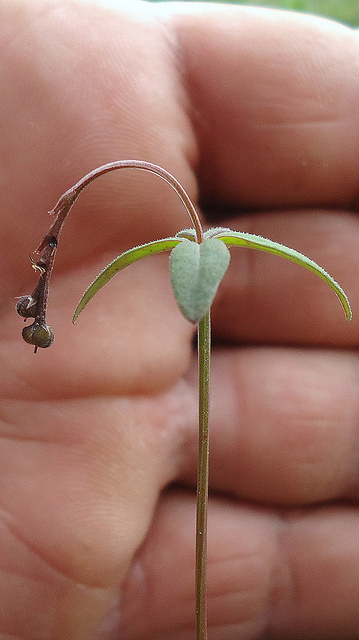 "Genuflecting" means "kneeling." In the botanical world the term applies to a plant whose fruiting branches, instead of reaching toward the sky to disperse seeds, bend down to deposit the seeds near where the plant is rooted.  Pensoft continues the story --


A new plant species that buries its seeds - the first in its family - was discovered in the Atlantic forest of Bahia, Brazil, by an international team of amateur and professional scientists.

José Carlos Mendes Santos (a.k.a. Louro) is a handyman in rural northeastern Bahia, Brazil - one of the areas of the world with the highest biodiversity. Two years ago, he found a tiny, inch-high plant with white-and-pink flowers in the backyards of the off-the-grid house of amateur botanist and local plant collector Alex Popovkin. The little plant was brought home to be grown on a window sill for closer observation...

The plant growing on the window sill soon showed a particular and rare characteristic: after fruits were formed, the fruiting branches would bend down, depositing the capsules with seeds on the ground (and sometimes burying them in the soft cover of moss)...

Interesting.  Now ponder for a moment why in the world a plant would want to deposit its seeds at its own base.   Yesterday I walked through my front yard plucking seedheads of dandelions that had newly-emerged (in mid-December!) before the seeds could be dispersed.  The dandelion stores large amounts of energy, and when the seeds are ripe it shoots up a stem way above the plant and surrounding grasses to facilitate seed dispersal by the wind.  In the woods behind our house several plants produce burrs that adhere to pants-legs (and animal fur) to be carried far away.  So why does this plant bury its seeds at its base?  One presumes the plant is an annual, so it's not creating competition for itself.  And here is the key:


...thereby ensuring that the seeds would end up as close to the mother plant as possible, facilitating its propagation the following season. This phenomenon, called geocarpy, is a rare adaptation to growing in harsh or ephemeral environments.

So if you're an annual plant that has managed to find the only sunny spot in a deeply-shaded forest or the only collection of dirt on a rocky mountainside, you want your seeds to wind up at your feet.  Nature is so cool.