Proof that water once flowed on Mars 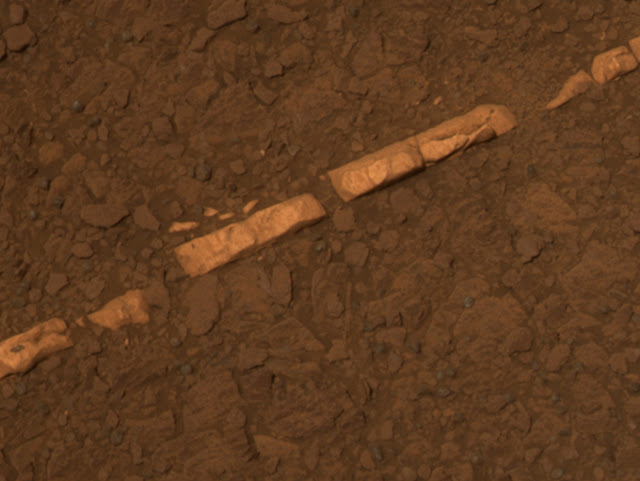 I am recurrently fascinated by the discoveries of the rovers on Mars.  This week we get a photo from the Opportunity rover showing an exposed vein of gypsum in the soil.


"This tells a slam-dunk story that water flowed through underground fractures in the rock," said Steve Squyres of Cornell University, Ithaca, N.Y., principal investigator for Opportunity. "This stuff is a fairly pure chemical deposit that formed in place right where we see it. That can't be said for other gypsum seen on Mars or for other water-related minerals Opportunity has found. It's not uncommon on Earth, but on Mars, it's the kind of thing that makes geologists jump out of their chairs."..

Last month, researchers used the Microscopic Imager and Alpha Particle X-ray Spectrometer on the rover's arm and multiple filters of the Panoramic Camera on the rover's mast to examine the vein, which is informally named "Homestake." The spectrometer identified plentiful calcium and sulfur, in a ratio pointing to relatively pure calcium sulfate.