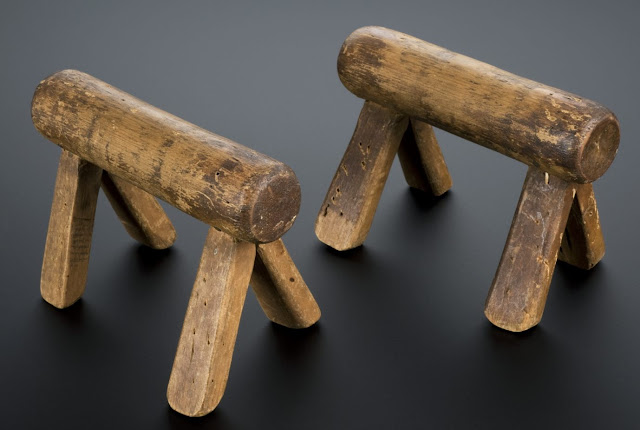 When I encountered the photo at the Science Museum, the term "crutches" didn't make sense - until I read further to learn that they were crutches for a leper.  They would have been used they way this legless beggar in Suzhou - 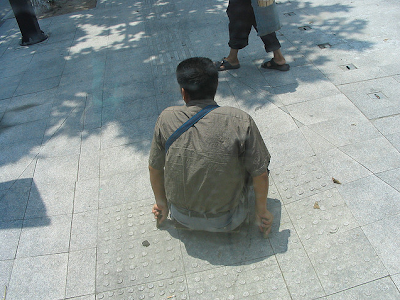 - propels himself on a wheeled dolly.  I suppose the eighteenth-century leper wouldn't even have had the benefit of a dolly.

Update:  When I posted the above six months ago, I thought it was one-and-done, but today I encountered this image at Got Medieval:

It's an illustration from the fourteenth-century Bodleian Alexander (MS Bodl. 264), depicting "A gentleman’s dispute among disabled beggars."  Carl Pyrdum notes at the post:


I feel compelled to point out–with some weird version of disciplinary pride?–that the medieval manuscript version of the theme boats three brawlin’ beggars to the cartoon’s two, a net improvement of fifty percent over South Park.  And it’s way bloodier than they dared, to boot (which you can see more clearly if you click [the image at the source] to expand).

I would add that the event pictured may not depict the social realities of the day, since the marginal illustrations sometimes reflected allegories or the whimsies of the artists rather than serving as frank documentary illustrations.

But it's something you don't see every day.  Also interesting that the technology remained unchanged for four centuries.

Addendum:  A hat tip to Got Medieval for some additional information.  The small "trestles" that the men are supporting themselves on were called "scabella," and the men "scabellarii."  They are "footless," and the upright man wielding the crutch has lost one foot as well.

I would presume these are victims of leprosy, but since their hands are intact, perhaps these are battle injuries, or even ?the result of ergot poisoning.