Some excerpts from a longer essay full of cautions and caveats, by long-time conservative Andrew Sullivan:


What we are talking about here is who to support in a primary dominated by extremes, resentment, absence of ideas and Obama-hatred.

And I see in Paul none of the resentment that burns in Gingrich or the fakeness that defines Romney or the fascistic strains in Perry's buffoonery. He has yet to show the Obama-derangement of his peers, even though he differs with him. He has now gone through two primary elections without compromising an inch of his character or his philosophy... When he answers a question, you can see that he is genuinely listening to it and responding - rather than searching, Bachmann-like, for the one-liner to rouse the base. He is, in other words, a decent fellow, and that's an adjective I don't use lightly. We need more decency among Republicans. 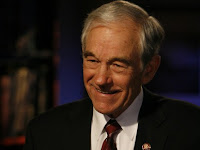 And on some core issues, he is right. He is right that spending - especially on entitlements and defense - is way out of control. Unlike his peers, he had the balls to say so when Bush and Cheney were wrecking the country's finances, and rendering us close to helpless when the Great Recession came bearing down. Alas, he lacks the kind of skills at compromise, moderation and restraint that once defined conservatism...

What Paul understands - and it's why he has so much young support - is that the world has changed. Seeking global hegemony in a world of growing regional powers among developing nations is a fool's game, destined to provoke as much backlash as lash, and financially disastrous as every failed empire in history has shown.

We do not need tens of thousands of troops in Europe. We do not need to prevent China's rise, but to accommodate it as prudently as possible. We do need to get out of the Middle East to the maximum extent and return our relationship with Israel to one between individual nations, with different interests and common ideals, not some divine compact between two Zions. We do need a lighter, more focused, more lethal war against Jihadism - but this cannot ever again mean occupying countries we do not understand and cannot control. I suspect every other Republican would launch a war against Iran. Paul wouldn't. That alone makes a vote for him worthwhile...

Just as vitally, no other Republican (or Democrat) would end the war on drugs, one of the most counter-productive, authoritarian campaigns against individual liberty this country has known since Prohibition.

He could also begin to unwind the imperial presidency. We would no longer go to war without a full Congressional vote and approval. Torture would not return under Paul...

But Paul's libertarianism may be the next best thing available in the GOP. It would ensure real pressure to make real cuts in entitlements and defense; it would extricate America from the religious wars of the Middle East, where we do not belong. It would challenge the statist, liberal and progressive delusion that for every problem there is a solution, let alone a solution devised by government. As part of offering the world a decent, tolerant conservatism, these instincts are welcome. As an antidote - and a very strong one - to the fiscal recklessness and lawless belligerence of Bush-Cheney, it is hard to beat. The Tea Party, for all their flaws, are right about spending and the crony capitalism it foments. So is Paul.

I regard this primary campaign as the beginning of a process to save conservatism from itself.