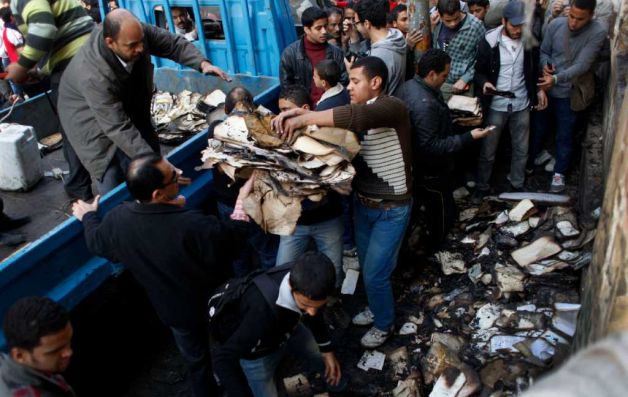 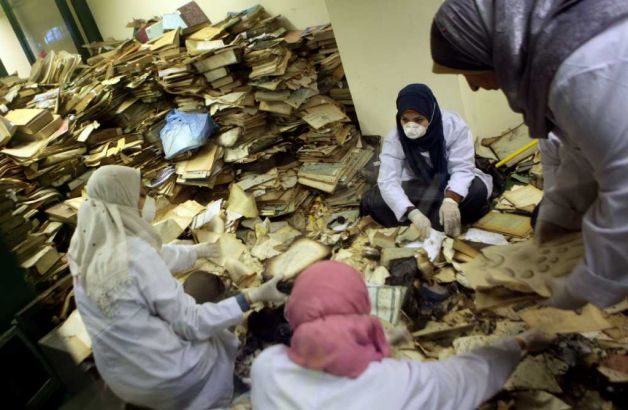 Photos and excerpts from the AP story in the Seattle Post-Intelligencer:


CAIRO (AP) — Volunteers in white lab coats, surgical gloves and masks stood on the back of a pickup truck Monday along the banks of the Nile River in Cairo, rummaging through stacks of rare 200-year-old manuscripts that were little more than charcoal debris. The volunteers, ranging from academic experts to appalled citizens, have spent the past two days trying to salvage what's left of some 192,000 books, journals and writings, casualties of Egypt's latest bout of violence.

Institute d'Egypte, a research center set up by Napoleon Bonaparte during France's invasion in the late 18th century, caught fire during clashes between protesters and Egypt's military over the weekend. It was home to a treasure trove of writings, most notably the handwritten 24-volume Description de l'Egypte, which began during the 1798-1801 French occupation.

The compilation, which includes 20 years of observations by more than 150 French scholars and scientists, was one of the most comprehensive descriptions of Egypt's monuments, its ancient civilization and contemporary life at the time.

The Description of Egypt is likely burned beyond repair. Its home, the two-story historic institute near Tahrir Square, is now in danger of collapsing after the roof caved in...

At a news conference Monday, a general from the country's ruling military council said an investigation was under way to find who set the building on fire. State television aired images of men in plainclothes burning the building and dancing around the fire Saturday afternoon. Protesters also took advantage of the fire, using the institute's grounds to hurl firebombs and rocks at soldiers atop surrounding buildings.

We know what will follow.  The protesters will blame the military, the military will blame the protesters, and the truth will never be known.  But we all know that incidents like this are often covers for rampant theft and looting.  Personally, I have no doubt that a lot of valuable books, maps, and manuscripts will be finding their way into private collections.

The discussion thread at Reddit raises a number of crucial points, including the extremely complex question of repatriating archaeological artifacts to their original locations, and digitizing historic material before the items are lost.