This will be the final "Sunday smörgåsbord" 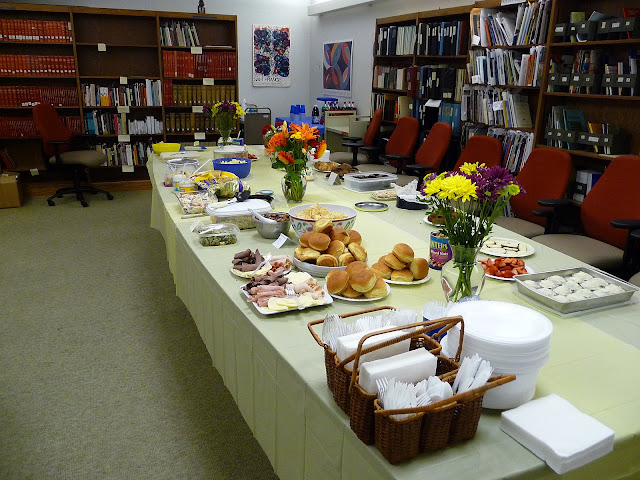 This marks the 50th time I've used a "linkdump" to decompress my bookmarks folder.  I began doing this not long after I started blogging, as a way to alert people to subjects that I didn't have time to work into full posts, and/or to place material into the blog that I could retrieve later with a keyword search.  I opted to call such posts smörgåsbords in honor of the Scandinavian half of my heritage and to evoke the concept that readers could pick from the morsels those items that interest them and ignore the rest.

But the term is getting overworked; in particular, I'm sure readers have no further need of yet additional photos of tables-full of food.  Earlier this year I stopped using photos of feasts and foods, opting to use the space for other interesting images.  And now I'm going to drop the term smörgåsbord altogether.  I'll still be doing linkdumps, but I'll need to come up with some other catchy descriptive phrase (Ed Yong has already laid claim to "I've got your missing links right here.")

For this final one, I've embedded a photo that I've been saving for so long I've lost the original source (anyone know?  it doesn't come up with TinEye).  It shows what is almost certainly a conference room in an academic center, with bound journals on the bookshelves and the sort of culinary fare that one might expect at a university.  The photo brings back many happy personal memories.

One of this years IgNobel prizes was awarded to a group of Japanese researchers who developed a way to incorporate wasabi into a fire alarm designed to awaken deaf people from sleep.

From two months ago, a context post explaining the "niggerhead" reference that caused Republican candidate Perry so much grief.

An eleven-year-old-boy entered the Guiness Book of World Records for performing the longest "limbo" on roller skates - 126 feet - traveling beneath parked cars.  Video at the link.

Video of a Cornwall cliff collapsing.

Some people are getting sick and tired of the seemingly endless use of the color pink to raise awareness of breast cancer; they refer to it as "pinkwashing."

Aesthetic vaginal surgery is one of the fastest-growing medical cosmetic procedures- primarily for labial reduction.

On October 14, John Walkenbach wrote his final post for the J-Walk blog.  J-Walk served as one of my role models when I set up TYWKIWDBI, and over the past four years I have linked there almost 100 times.

Those of you who grew up in Minnesota in the 1950s will want to see the Hamm's beer commercial posted at Miss C Recommends.  The bear in the advertisements was a truly iconic figure in his time.

The UK version of Who Wants to be a Millionare experienced an episode of flagrant fraud and cheating involving coughing signals about answers.

For caninophiles, the Wall Street Journal discusses the co-evolution of dogs and humans.

A Florida sheriff uses his 10,000 Facebook fans to help him solve crimes.

The Atlantic lists the ten most valuable blogs in 2011 (from a larger list of 25).  BoingBoing (#20 on this second list) is the only one of the group that TYWKIWDBI has ever linked to.

"I've got to find the flaming nipple!" was the response of David Lynch to the news that lost footage from his movie "Blue Velvet" has been found.  50 minutes of the new footage has now been edited into a new DVD to be released on the movie's 25th anniversary next year.

A scathing review of the movie Human Centipede 2.

Penn Jillett's book of "signs you may already be an atheist" has climbed the charts at Amazon.  He apparently tends to group agnostics in with atheists.

"Dryboarding" was an alternative form of torture employed at Guantanamo.  Some have noted that the procedure bears an uncanny resemblance to reported suicides at Guantanamo.

Shrimp are capable of spinning silk to bind sand grains together to make a little "house."  You learn something every day.

Football fans will want to read about Brad Wing, the punter for LSU who moved from Australian football to the NCAA and is now a major star who can punt with accuracy, or boom it 70+ yards.

Little girl in tears after the Packers beat the Vikings.  She will probably be crying for years to come.

Video of a little dog chasing his owner who is riding a trail bike.  The dog gets major air.

A 10-cm leech was removed from the trachea of a young boy.  Video at the link.

An infographic explains when to use the term i.e. in a sentence, and when to use e.g.  Many, many people get this wrong.

This time of year many people make gingerbread houses (our neighborhood children were busy with this at a party today).  The Great Wolf Lodge at Wisconsin Dells has a gingerbread house so big a group of adults can eat dinner inside it.  Video at the link.

The European Union reports that the U.K. has a greater percentage of obese women (24%) than any other country in Europe, confounding some pre-existing national stereotypes.

Some hockey enthusiasts will already know this, but it's an astounding statistic:  If Wayne Gretsky had never taken a shot on goal in his life, he would still be the all-time points leader in the history of the NHL.

Buzzfeed has collected what someone considers the "45 most poweerful images of 2011."  One can argue with some of the selections, but it's still a remarkable assemblage of images.

And finally, a video of Margaret Thatcher reciting elements of the "Dead Parrot Sketch" in a political speech.