Denisovan genes as markers of migration 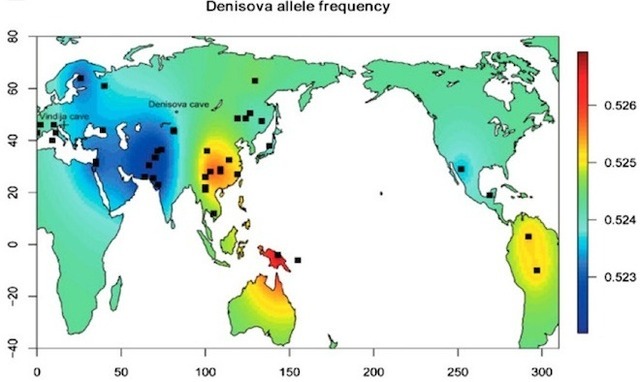 There's too much to cover here in a short post, but I'll sketch what I understand as the basics.  Denisovans were ?pre-humans/proto-humans of the genus Homo who died out as a species.  They were genetically distinct from us, but some of their genes are present in modern humans.  The distribution of those genes today is not random, as shown by the figure above.


“We haven’t been a very exclusive species, with a very narrow origin,” said Martin Jacobsson. Interbreeding with other members of the human family tree “is not a unique event. It’s a more complex story than we thought before.”

In a study published Oct. 31 in the Proceedings of the National Academy of Sciences, Jacobsson and co-author Pontus Skoglund searched through 1,500 human genome scans from around the world for genes found in Denisovans but not chimpanzees or Neanderthals.

While the previous finding of Denisovan inheritance involved analysis of ultra-high-resolution human genome scans, of which only a few exist, Jacobsson used low-resolution scans. These are more commonly available and allowed the researchers to detect Denisovan signals in genomes from mainland southeast Asia. A signal also appeared in South America, but Jacobsson said that’s probably a false positive.

I'm interested in the South American hits because of my belief in early colonization of the Americas from Oceania.  I believe there's good evidence that the chickens in Chile and Peru came from Polynesia in pre-Columbian times.