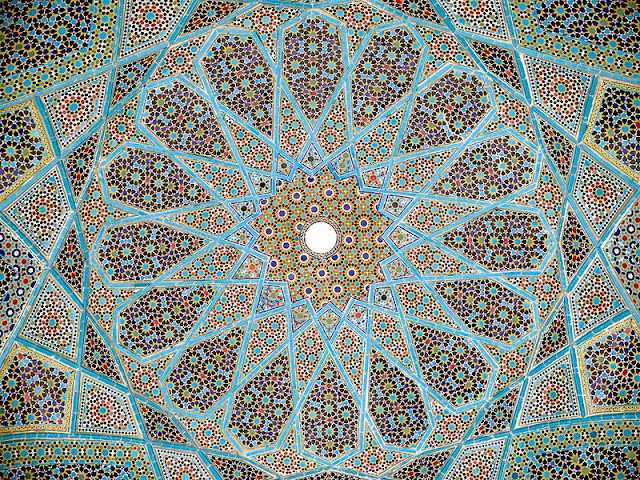 From a book by Oliver Sacks about the physiology and psychology of perception:


David Brewster, a nineteenth-century scientist… observed a related form of stereo illusion. Gazing at wallpaper with small repetitive motifs, he observed that sometimes, with the proper convergence or divergence of gaze, the patterns might quiver or shift and then jump into startling stereoscopic relief, seeming to float in front of or behind the wallpaper.

…it seems likely that such “autostereograms” have been experienced for millennia, with the repetitive patterns of Islamic art, Celtic art, and the art of many other cultures. Medieval manuscripts such as the Book of Kells or the Lindisfarne Gospels, for example, contain exquisitely intricate designs done so exactly that whole pages can be seen, with the unaided eye, in stereoscopic relief. (John Cisne, a paleobiologist at Cornell, has suggested that such stereograms may have been “something of a trade secret among the educated elite of the seventh- and eighth-century British Isles.”)

In the past decade or two, elaborate autostereograms have been widely popularized in Magic Eye books.

Those unfamiliar with "Magic Eye" books can read about them at Wikipedia.  The embedded image is "Geometric arabesque tiling on the underside of the dome of the Tomb of Hafez in Shiraz."  For extensive research on Islamic design, visit the Catnaps.org website compiled by TYWKIWDBI reader John Lockerbie.

Addendum:   Those seriously interested in this subject matter should look at the two links submitted by reader Dan Noland: a comparison of Islamic design patterns with the molecular arrangement of quasicrystals,  and another discussing Medieval Islamic architecture, quasicrystals, and Penrose tilings.

Addendum #2:  Here is some additional insight from Mr. Lockerbie:


The asymmetry of the design is interesting in that, as suggested, there may be at least two possibilities, perhaps at least three. Firstly, there is the probability that a number of artisans worked on the ceiling, directed by a master craftsman. Each may have deliberately attempted to work in slightly different and personal interpretations within the overall piece maintaining its form and balance. Secondly, the individual fitting of the tiles may have required small adjustments to the work in order to take up discrepancies both in the tiles as well as in the ground on which they are set.

Thirdly, and a very commonly presented argument in the Islamic world, is that no designed work should be perfect: each must demonstrate an irregularity as to do otherwise would be to show yourself in competition with Allah.

If the latter is correct, then it's possible that the first two reasons might be actively subsumed within its argument.

Incidentally, the most unusual eccentricity of the design to my eye is the lack of geometrical coherence of the central yellow-based pattern around the central hole. With sixteen-point geometry establishing the surrounding star pattern, I would have anticipated something far better aligned to its points.

That last observation re the asymmetry is quite compelling; I hadn't even noticed that part of the design until he pointed it out.  Interesting.