"The agony of the feet" 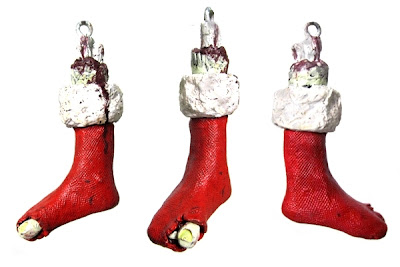 In early November, another incident in the severed feet saga occurred in western Canada, as noted by the National Post:


The B.C. Coroners Service is investigating the discovery of another foot over the weekend.... Eight feet belonging to six different people were discovered along the B.C. coast between August 2007 and August 2011. Six of the feet have since been identified as belonging to four people. The remaining two appear to belong to two men whose identities are yet to be determined.

The CBC adds these details:


Officials said that on Friday a youth attending a camp at the Sasamat Outdoor Centre spotted the boot, which was floating in a few metres of water off the northwest shore. When the boot washed up Saturday morning and a sock and bones were found inside, authorities were called in...

The coroners service said the autopsy did not show any tool marks or impressions on the bones to indicate the foot had been mechanically separated from the body... The metal eyelets are significantly rusted, which suggests that it could have been in the water for some time.

Although it is the ninth foot to wash up in southwestern B.C. in the past four years, the coroners service said there are "some significant differences between this and the other eight cases."

For new readers, I should repeat my previous clarification about severed feet that "It's not a fetish for me, and I don't monitor the web for additional incidents or set any Google alerts, but having posted so many stories in the past, I now have a set of readers alert to new developments."  This time I'll add a hat tip to Elizabeth, who notified me about an ABC news report in October that provided a mundane explanation for several of the feet,
and to Andre, who noted that BoingBoing is also devoting valuable column inches to the severed feet stories.

Writing posts on this subject typically presents two challenges - coming up with a catchy title, and searching the 'net for an illustration without wading into the world of fetishism. The title this time is a parody of ABC's "Wide World of Sports" motto (via the National Post).  The image shows "Zombie stocking Christmas 'gornaments'" available from the Neatoshop.