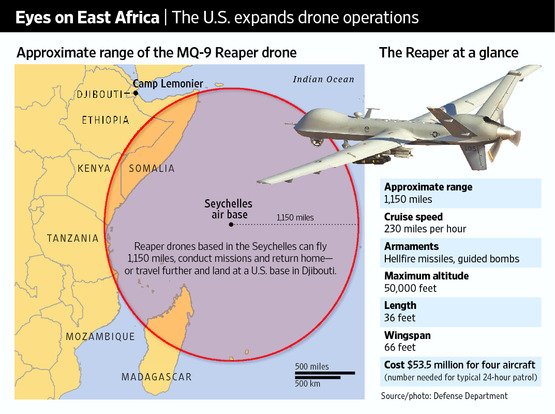 The image above comes from a September Wall Street Journal article about expanded drone usage around the horn of Africa.  Another September article, this one in the Washington Post, discusses autonomous drones:


This successful exercise in autonomous robotics could presage the future of the American way of war: a day when drones hunt, identify and kill the enemy based on calculations made by software, not decisions made by humans...

“You can imagine real-time scenarios where you have 10 of these things up in the air and something is happening on the ground and you don’t have time for a human to say, ‘I need you to do these tasks.’ It needs to happen faster than that.”..

The prospect of machines able to perceive, reason and act in unscripted environments presents a challenge to the current understanding of international humanitarian law.

A column in Salon in October questioned whether even the current use of drones is legal:


Drones are no longer deployed solely in countries like Afghanistan and Iraq, where the United States military is party to a declared armed conflict. Drones are now being used in Yemen, Somalia, Libya, and, perhaps most controversially, in Pakistan, a nominal U.S. ally in the war on terror.

Legal scholars, diplomats, military experts and activists have all weighed in on the issue, but to date there is little consensus on whether drones are acceptable under international law...

“When the military is operating in a formal theater of conflict, they are guided by the Law of Armed Conflict, with all of it rules and restrictions. They can tell you what laws they follow, even if they sometimes break them. With the CIA, we just do not know — do they engage in legal analysis? What is the process by which they review targeting decisions? What body of law do they see as pertaining to them?”

And finally, some excerpts from a Glenn Greenwald column on the domestic use of drones:


Even leaving aside the issue of weaponization (police officials now openly talk about equipping drones with “nonlethal weapons such as Tasers or a bean-bag gun”), the use of drones for domestic surveillance raises all sorts of extremely serious privacy concerns and other issues of potential abuse. Their ability to hover in the air undetected for long periods of time along with their comparatively cheap cost enables a type of broad, sustained societal surveillance that is now impractical, while equipping them with infra-red or heat-seeking detectors and high-powered cameras can provide extremely invasive imagery. The holes eaten into the Fourth Amendment’s search and seizure protections by the Drug War and the War on Terror means there are few Constitutional limits on how this technology can be used, and there are no real statutory or regulatory restrictions limiting their use. In sum, the potential for abuse is vast, the escalation in surveillance they ensure is substantial, and the effect they have on the culture of personal privacy — having the state employ hovering, high-tech, stealth video cameras that invade homes and other private spaces — is simply creepy...

Where will it all end?

Addendum Dec 8:  I originally wrote the post to focus on the ethics/legality of the domestic use of drones, but the news today that an American drone was downed in Iran presents some additional considerations.

I haven't searched much yet to see how the U.S. media is presenting the story, but the BBC has posted a video showing the U.S. drone in Iranian hands, apparently undamaged.  As the narrator indicates, this would seem to support the Iranian claim that rather than shoot the drone down, they brought it down by "cyberwarfare."  That could be total b.s., but if true it has enormous strategic implications, not only re U.S./Israeli espionage, but for the tactical use of the devices in a hot war.

Obviously the next step will be for the Iranians to reverse engineer the dickens out of it (unless it has some type of self-destruct device built in, which is possible).  Even if they can't access the software and electronics, they now have access to the dimensions, design, and materials of the stealth technology.

Lastly - a Wikipedia page listing drones ("unmanned aerial vehicles")  around the world, including both combat, recon, and research/survey types.

Addendum:  Reddit discussion thread has comments by people with military UAW experience; they favor this being a controlled crash, not brought down by cybermeans.