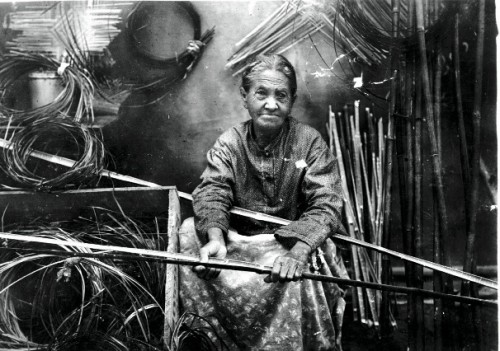 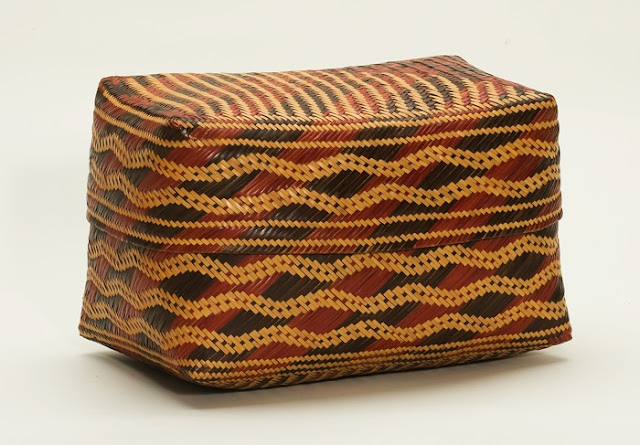 
In American history, no class of person remains more obscure than indigenous women. Darden was most likely born in 1829 or 1830, and seems to have spent her entire life on the Chitimacha reservation at Charenton, in the isolated bayous west of New Orleans. She saw considerable change during her lifetime. Her people had adapted to the way of life of their neighbors, French-speaking Acadians (Cajuns), who had encroached on Indian land since their expulsion from Canada in the 1750s and ’60s. The Chitimacha labored in sugar plantations in the summer, kept market gardens, harvested swamp cypress timber, and wove baskets...

Darden was the sole surviving Chitimacha practitioner of the intricate double-weave technique producing a basket in two continuous layers of river cane, one inside the other... Darden and her students had woven no fewer than 72 baskets, which were shown to acclaim at the Louisiana Purchase Exposition in St. Louis in 1904...

The design of Darden’s baskets—red, black, and plain splints, plaited diagonally—is strikingly similar to the oldest known Cherokee basket, sent to Britain in 1725 and now in the British Museum. The Cherokee and the Chitimacha are among the heirs to the Mississippian urban cultures disrupted by diseases brought by the Spanish in the sixteenth century, so their basketry practices may have had a common origin...

Transmitted through practice, the designs were committed to each weaver’s memory... The pattern names, such as “Alligator Guts,” “Worm Tracks,” and “Blackbirds’ Eyes,” enhance the baskets’ association with the natural world of forest, swamp, and bayou.

Traces of river-cane baskets from as early as the third millennium b.c. have been excavated within 30 miles of Charenton. Rectangular, lidded river-cane baskets were discovered in the Spiro Mound in Oklahoma, a site used between a.d. 850 and 1450... All we can be sure of is that Darden and her students, followed now by her descendents—contemporary weavers Melissa, Scarlett, and John Paul Darden—have handed down these rich tokens of a sophisticated tradition of both thought and practice.

Shown above: Clara Darden circa 1900 (Courtesy of the Peabody Museum of Archaeology and Ethnology, Harvard University, 2004.24.26766B.) and her "worm tracks" pattern. Further information (and photos of an additional dozen patterns) at Harvard Magazine.

(reposted from 2010 in response to a reader's recent comment)