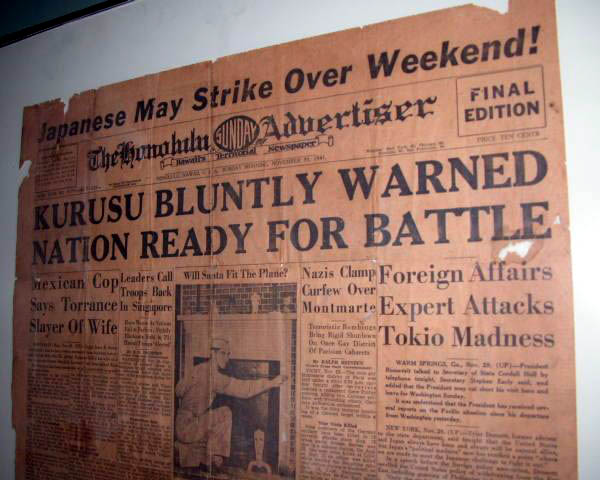 I bookmarked this several years ago and should have posted it yesterday.  The idea that the U.S. had foreknowledge of the Pearl Harbor attack is something I had heard for years.  The UPI cited a New York Times report indicating that such speculation was false:


Historians say they have concluded the United States had no advance notice Japan intended to attack Pearl Harbor Dec. 7, 1941, settling a long-debated issue.
The New York Times reported on its Web site Saturday that historians for the National Security Agency concluded in a history released last week that decoded messages buried in Japanese-language weather reports, meant to alert Japanese diplomats to destroy codes, did not reach U.S. officials prior to the attack...

"In reality," the authors concluded, "the Japanese broadcast the coded phrase(s) long after hostilities began -- useless, in fact, to all who might have heard it."

Here are excerpts from the full-blown conspiracy theory:


The only newspaper in the whole world to use any portion of the story was the Honolulu Advertiser. A front-page banner headline in the paper the morning of Sunday, November 30, "JAPANESE MAY ATTACK OVER WEEKEND!" A subhead noted, "Hawaii Troops Alerted".

Suspiciously, the story didn't mention that the target of the Japanese attack would be Pearl Harbor itself. The horrible cost paid for that simple omission is well-known.

For an extensive and well-reasoned discussion of this topic, see "The Truth About Pearl Harbor" at Neatorama (abstracted from Uncle John's Bathroom Reader).