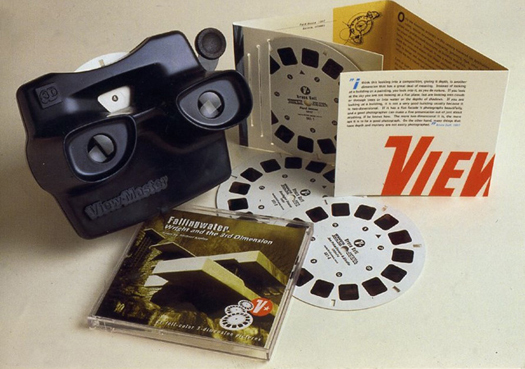 From an article this week at the Design Observer:


“People started collecting these pictures because it was a way to see exotic parts of the world that they could never afford to travel to,” recalled Kaplan, who grew up in the 1950’s, during the height of the View-Master’s popularity in the United States. At the time, View-Master models were sold at a dollar each (equivalent to $9.27 in 2011), while the reels themselves were only 35 cents, making stereoscopic viewers an affordable hobby. It was common for every child to own one. While adults watched television, children escaped into three-dimensional imaginative worlds. Like baseball cards and stamps, they satisfied the innate human desire to collect. For children like Kaplan in the 1950’s, collecting View-Master reels “was like having your own little art collection.”..

“When people think of them from their childhood, back in the 1950’s, they think of the black and brown ones,” stated Kaplan, remembering the viewers that were produced in a sturdy, shock-resistant Bake-Lite plastic. But the slow compression-molding process of Bake-Lite was too costly for the rapid demand in viewers. So in 1958, Charles Harrison updated the shape and materials of the Model F View-Master, replacing the original Sawyer design with a beige plastic. While the format of the standardized reels never changed, the viewer went through several redesigns under different brands, embracing a bright red plastic after it was acquired by GAF, and eventually various shapes and colors as it was marketed solely to children under the Fisher-Price brand.

We had an early View-Master in our home in the mid-1950s.