Addendum to the original post (below).  A tip of the hat to expatQLD, who after reading the post below searched YouTube and sent me a link to the video showing this lady at work.  As it started I thought I was watching computer graphics because of the unbelievable abundance of sea life; then when I saw her rubbing the snout of the shark I realized this was Cristina Zenato at work.

By all means, click the fullscreen icon [bottom far right corner] to get full enjoyment of this video !! 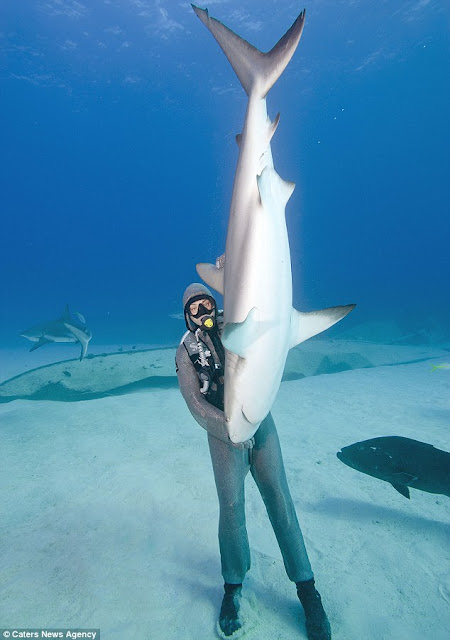 
...She induces the 'tonic' state in the shark using a little-known technique of rubbing the ampullae of Lorenzini - the name given to hundreds of jelly-filled pores around the animal's nose and mouth... The pores act as electroreceptors detecting prey moving in the electromagnetic field around the shark - but also for some reason rubbing them turns 'Jaws' into a sleeping baby.

Ms Zenato uses her ability to put the sharks in a sleepy state to educate other divers, remove parasites and even take out fishing hooks caught in their mouths.

Mr Meier, a commercial photographer who specialises in underwater, nature and travel, said he hoped to raise awareness of the plight of sharks. He said: 'We kill millions of sharks every year, with the majority of those having their fins cut off while still alive and then thrown back into the water to die a slow, agonising death.

I remember reading reports years ago of surfers or swimmers defending themselves from sharks by hitting the shark on the nose; it was said to be an effective deterrant.  Perhaps this report offers a biologic basis for that observation.