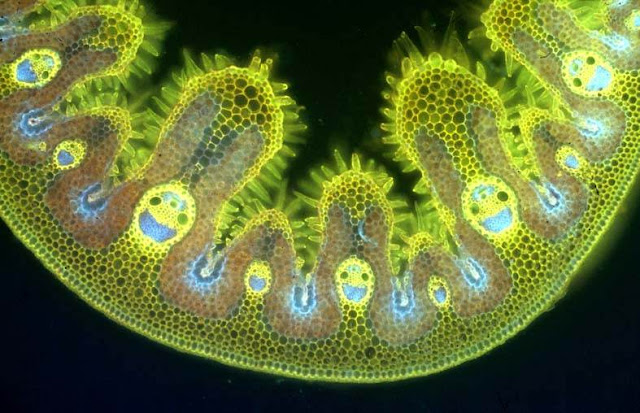 "Marram Grass is often found on coastal dune systems - where plants have adapted to cope with a potential dearth of fresh water - so they have to be fairly economical with the fresh water they do have access to.

This is a cross section of the leaf. It has a tough exterior, it is rolled along its length and the interior side is covered in fissures and hairs. The purpose of these features is to minimise the airflow over the stomata - the apertures where gas exchange occurs - which are buried in the area shown in blue on this image. When the stomata open, the plant can take carbon dioxide from the atmosphere, but it loses water through transpiration. Transpiration is an important process and the plant can regulate it in dry environments through adoptions such as those displayed in this image."

Of course, if there were a spider on this grass, it would have to be this spider: 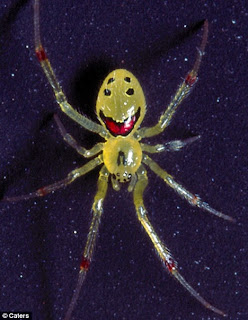 Theridion grallator, also known as the “happy face spider,” is a member of the Theridiidae family.

The Hawaiian name is nananana makakiʻi (face-patterned spider). The binomial grallator is Latin for “stiltwalker”, reference to the species’ long spindly legs...

As the pattern may change according to what food the spider has eaten (Gillespie, 1989) and as T. grallator is very small, hides during the day, and is thus not a significant prey item for any species of predator, it is more likely that the bizarre variety of patterns serves no significant adaptive purpose at all.

Update:  I think I finally found the source for the photo - Phil Gates at Beyond The Human Eye, a microscopy blog that appears to have a lot of interesting content.