Yeti "nest" in a Russian forest 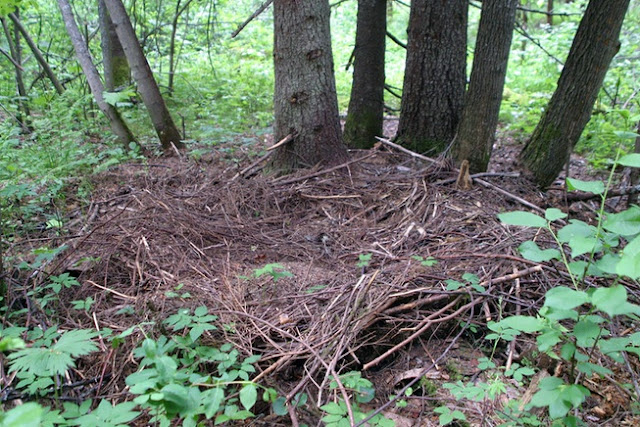 I don't believe in yetis, but many people do, and some are traveling to Russia for an international conference on "hominology."


Siberian officials this month sponsored nature lovers, scientists and foreigners who claim they have socialized with Bigfoots to attend an International Scientific-Practical Conference on Hominology...

Siberian officials issued a press release saying the three-day event this month turned up "irrefutable evidence" that such a creature—known to locals as a Snow Person—has been squatting in a Kemerovo cave 2,000 miles east of Moscow. Field trips into the surrounding mountains also turned up what they said were telltale signs of Yeti wanderings, such as bent and twisted branches, and underbrush that served as a bed...

Kemerovo Gov. Aman Tuleyev is offering a one million ruble, or about $31,500, reward to anyone who finds a Yeti, telling Russian television, "We need to sit down with him, drink some tea and talk about life."..

Mr. Burtsev has visited conferences and gone on hunts in the U.S., staying for a week in rural Michigan, where Robin Lynne, 48, says she has been feeding a family of Bigfoots outside her home for two years. Hosted by the regional government, Ms. Lynne flew to Siberia for the conference this month, where a tour bus with police escort drove participants to a hunting lodge in the piney outback. There, Ms. Lynne described how the Bigfoots bang on her door, bring her sticks as presents and drink water from a bucket in the yard when the weather is warm. "They love the bucket," she told the group.

The rest of the story is at the Wall Street Journal, where there is also a photo gallery.


Officials say they would also like to drum up some tourism for Kemerovo, a poverty-stricken region known more for its coal mine accidents than alpine beauty.