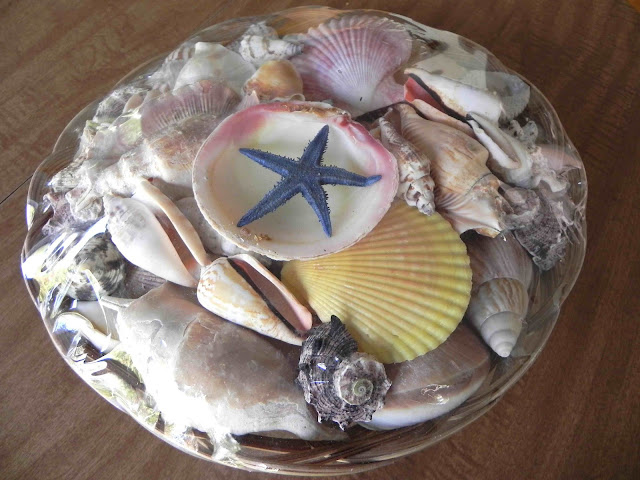 Several years ago I disposed of some geodes and agates by distributing them to children on Halloween.  This year I'm going to try something else.  While exploring a local hobby/craft shop, I saw the basket above on sale for $8, and wondered if the kids in our neighborhood would like something like these in lieu of the traditional candy.

Unwrapping the basket revealed the not-surprising fact that while the shells near the top were generally large and attractive, those underneath tended to be conventional and rather plain bivalves.  Still, there were a lot of shells - in addition to about a hundred clam-like bivalves, there were about 40 other attractive or interesting ones, which would bring the cost per shell down to the 20c range, in keeping with the cost of conventional candy.

Now the question will be whether the children will accept these or not.  We plan to offer them a choice between sweets (we give out bagged chips) and shells.  And I'll need to make sure the littlest kids understand that the shells are not edible.

This should be interesting.  I'll give a followup a week from now.

O.K.  - I know some of you are losing sleep wondering how this experiment would turn out.  Here are the totals.  76 trick-or-treaters from 5-8 p.m.  43 chose bags of chips (Doritos, Fritos, Cheetos, SunChips,  and Lay's potato chips).  33 chose seashells.

The first five kids to the door chose seashells, and about a half-hour after trick-or-treating started, a mommy from next door showed up smiling, reported that her kid had come home, handed her a shell, and told her "Mom, put this in a safe place," and then headed out the door again.

There was an obvious bias toward big shells.  You can offer kids the most remarkably patterned olives and cowries, but if there is a big ordinary shell next to it, they will choose the big shell every time.  During the early part of the evening, the big shells went fast. The chips took the lead when the big shells were gone.

There was an apparent "leadership" bias.  If the first kid of a group chose chips, the little kids with him tended to pick chips too.  But if he said "Seashells - cool!" then the other kids in the group tended to take shells as well.

There was no obvious age stratification.  I had thought a priori that little kids and teenagers would take chips,  but there were teenagers who walked away from the door waving their shells yelling "I got seashells at Halloween!"

It was an interesting experiment.  We're toying with the idea of adding peacock or turkey feathers as choices next year.

Note:  this study was conducted in Wisconsin, which is about as far from the ocean as you can get in the U.S.  Those of you in coastal communities would probably have to offer cowpies or something equally exotic to elicit a similar response.  :.)

Addendum:  Experiment repeated in 2012.  This year 30 out of 69 trick-or-treaters chose seashells.  That was exactly the same percentage as last year (44%, 33/76 last year).  Not the same kids (though several came to the door this year hoping for seashells).

Addendum 2:  For 2013 we repeated the seashell distribution, with consistently favorable results.   Given a choice between a seashell and a small bag of Fritos/Doritos/etc, the majority of the kids chose shells, often running back to the street holding the shell aloft in triumph to show their parents.

Addendum 3:  In 2015, 23 children chose bags of hips and 39 chose a seashell.
Addendum 4:  Trick-or-treat resumed in 2022 after a couple years of Covid.  This year 41 kids chose shells, while only 11 opted for chips (typically the youngest).  After we finish using up the last shells we have, we're going to discontinue the option, because of our doubts that these shells are sustainably harvested.  Will look for other items to give away.  Two bird nests were popular years ago.  Maybe agates in the future.  Or some of my old comic books.