As reported in The Guardian:


Colombian environmental authorities have reported a huge shark massacre in the Malpelo wildlife sanctuary in Colombia's Pacific waters, where as many as 2,000 hammerhead, Galápagos and whale sharks may have been slaughtered for their fins... 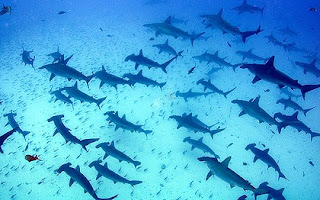 "I received a report, which is really unbelievable, from one of the divers who came from Russia to observe the large concentrations of sharks in Malpelo. They saw a large number of fishing trawlers entering the zone illegally," Bessudo said. The divers counted a total of 10 fishing boats, which all were flying the Costa Rican flag.

"When the divers dove, they started finding a large number of animals without their fins. They didn't see any alive," she said. One of the divers provided a video that shows the finless bodies of dead sharks on the ocean floor.

The sanctuary covers 8,570 square kilometres of marine environment that provides a habitat for threatened marine species – in particular sharks. Divers have reported sightings of schools of more than 200 hammerhead sharks and as many as 1,000 silky sharks in the protected waters, one of the few areas in the world where sightings of short-nosed ragged-toothed shark, known locally as the "Malpelo monster," have been confirmed. In 2006 Unesco included the park on its list of World Heritage sites...

Colombia's navy sporadically patrols the waters and maintains a small outpost on the 1.2 square metre island, which is 36 hours from the nearest port.

p.s. - one has to admire the resourcefulness of the Colombian navy for maintaining an outpost on an island that small...