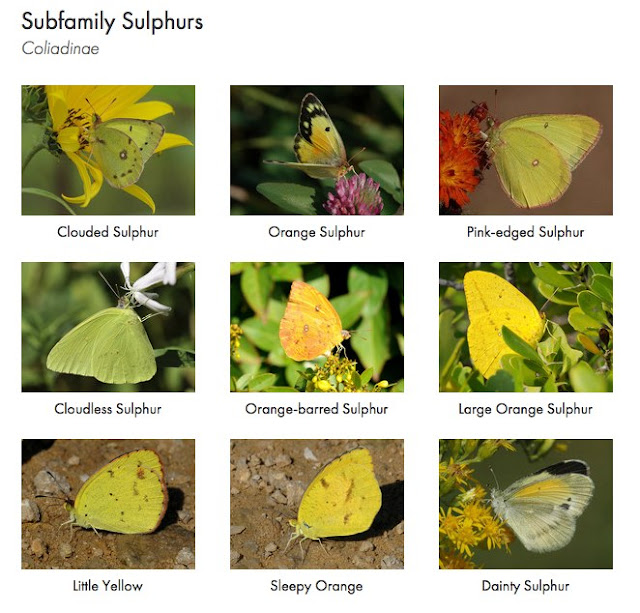 The email appeared in my box in early September - Southern Dogface butterflies had been identified at a location about an hour's drive from my home in Madison, Wisconsin.

The Southern Dogface is one member of a large group of butterflies known as the "Sulphurs" (because of their yellow color).  Like the "Whites" and the Monarchs, this family is well known to the general public because they are sufficiently common as to be seen by anyone spending time outdoors in most of the United States.

To the public, of course, they are all the same butterfly.  Enthusiasts like my colleagues and I use close-focusing binoculars to sort out the shades of yellow and the patterns of the spots that identify the subsets of the group.  And while they may be common within their usual ranges, sometimes butterflies travel (or are blown by winds) to areas where they are not usually seen.  Such was the case with the Southern Dogface, typically a resident of southern states, and only documented in Wisconsin about six times in the past 10 years.

This butterfly's odd name comes from the black/yellow pattern seen on the dorsum of its forewings, nicely shown here in a photo taken by Mike Reese at the National Butterfly Park in Mission, Texas last year. 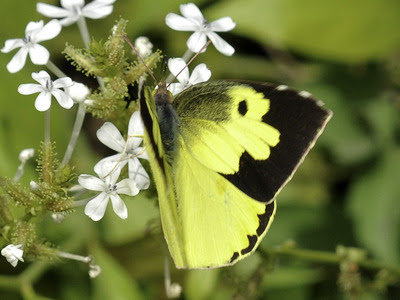 The original namer likened the yellow pattern to the face of a dog (it varies a bit from specimen to specimen - this one looks more ducklike).  There are several other identifying characteristics, including the shape of the wing, the pattern of flight, and a pink tinge on the margins of the wings that appears in late-season hatchlings.

When I received the email, I dropped what I was doing, loaded my boots, camera, binoculars, and trekking poles in the car and headed out for the adventure.  The destination location included several hundred acres of oak savannah and prairie; in the latter I finally spotted some sulphurs, but they were powerful and fast fliers who didn't allow a close approach.  After a while I met other members of the Southern Wisconsin Butterfly Association, who were there with the same goal - one of them even being pushed in a wheelchair hoping to spot a dogface.

The breakthrough came when the son of one member spotted something odd and (being in good health) was able to chase it a considerable distance until it finally landed underneath some foliage.  The "oddness" turned out to result from this being a mating pair "in copulo" (butterflies can fly while coupled).  The exertion required for one of the pair to fly while carrying the weight of the other required them to then rest for an extended period, which allowed us to get photos. 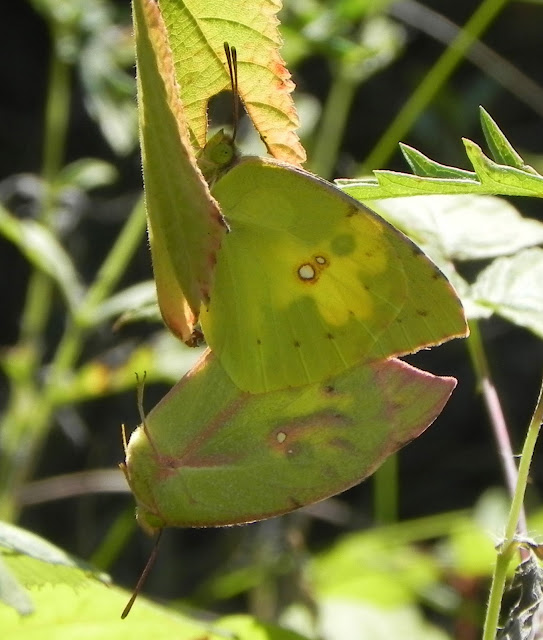 Because these butterflies typically rest with their wings vertical and apposed, it's difficult to get pix of the dorsal patterns (one method that sometimes works is to use a "sport" mode on the camera to snap 25 images during flight/takeoff/landing).  My best image came from letting the sun backlight the butterflies, which transilluminated the dogface (above).  It was a fortunate coincidence that the lower one of the pair is exhibiting the "rosa" pattern of magenta-pink highlights typical of the late-season form. (Another photo of this pairing, by Mike Reese, is posted here).

The fact that this pair was copulating does raise the possibility that they may be able to reproduce within the state; since they can't overwinter here, they have to migrate up from Texas, Florida, or the Gulf area, and by history have not been seen here before about August, which doesn't leave much time to form a second generation.  I plan to look for eggs, larvae, and (hopefully) a pupa next summer.

Top photos from Wisconsin Butterflies (which also has detailed information on Tiger Beetles and Robber Flies.)