How covered wagons traversed the Rockies 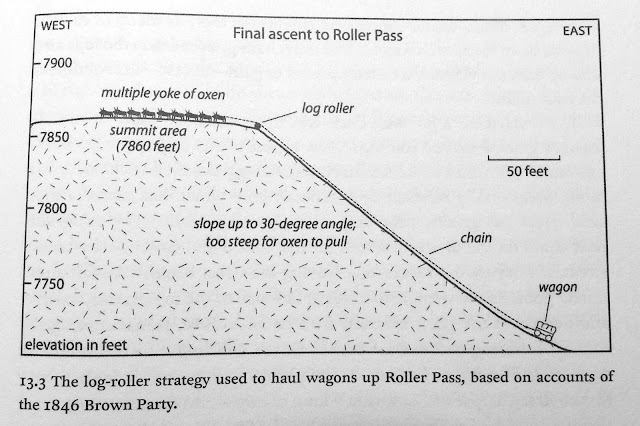 In old western movies, the settlers' covered wagons are typically shown traversing the plains and deserts.  Getting them over the mountains was less scenic.

The illustration above comes from an outstanding book - Hard Road West, by Keith Heyer Meldahl - that I'll review in more detail later.  It shows the technique used at a location eventually dubbed "Roller Pass."


At Roller Pass, the final 400 feet from a 30-degree slope of jagged boulders, "as steep as the roof of a house"... Oxen could not pull wagons directly up such a grade.  Instead, the animals were unhitched from the wagons and driven to the top, where they could heave along the flatter ground at the pass.  Some emigrants placed log rollers at the top of the slope.  They yoked the oxen to hundreds of feet of chain, and then passed the chain over the rollers and down the slope to a waiting wagon.  Then, under shouts and cracking whips, as many as 12 yoke of oxen hove to on each wagon..."

The drawing doesn't seem to be to scale re the wagon, but the point is clear.  At other sites, the terrain was even more impassable, and the wagons had to be unloaded and disassembled, and the wagon parts hoisted up the mountain with winches, then reassembled at the higher altitude (right image).

Credit for the lower image to Charly Price, the graphic artist for Tahoe National Forest; he prepared this drawing for the Overland Emigrant Trail Map, which he designed.  Via.


Addendum:  A tip of the blogging cap to Phillip Sexton, District Interpretive Coordinator for the Capital District of California State Parks, who encountered this post and offered the following information -

Your discussion concerns crossing the Rockies. Roller Pass is one of two passes used in the Donner Pass area just west of Truckee CA, part of the Sierra Nevada Range. Since the Sierra is granitic, rather than basaltic, as much of the Rockies are, the topography is structurally quite different.

Roller Pass in particular is the highest, but easiest route in the Donner area, because of this slope, as opposed to glaciated and frost heaved granite boulders that are more typical of the Sierra. The drawing of Charly’s represents conditions involved in crossing the actual Donner Pass, first used by the Stephens-Townsend-Murphy party in 1844. Because of difficulties like this, far and away most emigrants used Roller Pass on this route, since they did not have to unpack and disassemble their wagons.