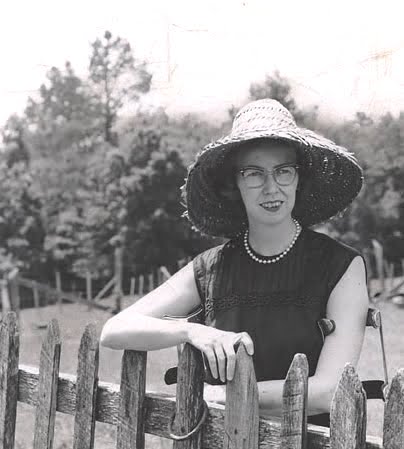 “Francis Marion Tarwater’s uncle had been dead for only half a day when the boy got too drunk to finish digging his grave and a Negro named Buford Munson, who had come to get a jug filled, had to finish it and drag the body from the breakfast table where it was still sitting and bury it in a decent and Christian way, with the sign of its Savior at the head of the grave and enough dirt on top to keep the dogs from digging it up. Buford had come along about noon and when he left at sundown, the boy, Tarwater, had never returned from the still.”
Text via First Lines, an interesting tumblr blog comprised exclusively of first lines from books.   That text comes from The Violent Bear It Away, written by Flannery O'Connor, pictured above as an adult when she needed crutches to help her cope with the ravages of lupus.

Here's an excerpt from her biography:


O'Connor described herself as a "pigeon-toed child with a receding chin and a you-leave-me-alone-or-I'll-bite-you complex." When O'Connor was six she taught a chicken to walk backwards, and this led to her first experience of being a celebrity. The Pathé News people filmed "Little Mary O'Connor" with her trained chicken, and showed the film around the country. She said, "When I was six I had a chicken that walked backward and was in the Pathe News. I was in it too with the chicken. I was just there to assist the chicken but it was the high point in my life. Everything since has been anticlimax.”

The photo below shows her reading at about that age - 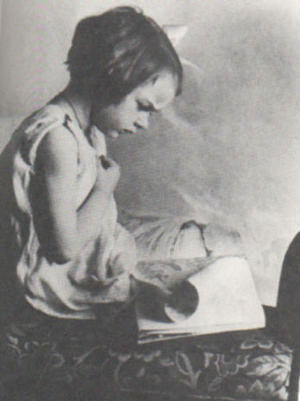 Photo found at Printed and Bound, via Uncertain Times, which included this marvelous quote:


“Everywhere I go I’m asked if I think the university stifles writers. My opinion is that they don’t stifle enough of them.”

Flannery O'Connor died at age 39 in 1964 as I was heading off to college.  Two years later I encountered her work in a course on American Southern writers, and eagerly read her two novels and most of her short stories.

(Originally posted February, 2010. Today I found a nice biography of her in the New Georgia Encyclopedia.)