Halloween makeup. And a story. And a turnip. 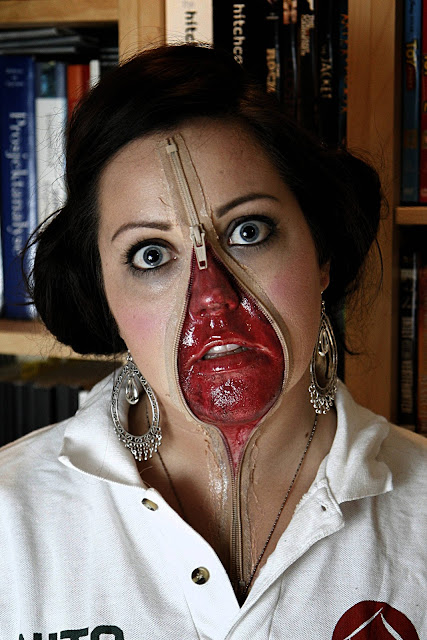 Nicely done, and doesn't look too complicated, though I'm not sure what you would use to stick the zipper on. Posted at Reddit by YouHadMeAtBacon.

Here's a Halloween-type story from a time when potter's fields were placed near quaking bogs and other untillable land:


A Waukesha County woman recalled that in the 19th century a shortcut ran from her grandmother's farm across the local potter's field. As she and her young cousins walked down the path among the graves in single file, "the springy nature of the ground caused the nearby crosses and boards to move to and fro, or up and down. Then someone became frightened and the entire little party began to hurry, and to run.

"Now, as they ran faster and faster, all of the grave markers appeared to be moving. It was as if the dead were trying to arise from their graves and pursue the intruders. Of course, the children never halted until in their mad flight they had scaled the fence at the other side of the cemetery."

And researching that story, I discover that untillable land is part and parcel of the very term "potter's field"-


The expression derives from the Bible, referring to a field used for the extraction of potter's clay, which was useless for agriculture but could be used as a burial site.

Sometimes you learn something even when you're not trying to.

And finally this image of a "traditional Irish Halloween Jack-o'-lantern":

- made from a turnip in the early 19th century (photographed at the Museum of Country Life, Ireland.)


While turnips have always been used in Ireland, lanterns in Scotland were originally fashioned from the thick stem of a cabbage plant, and were called "kail-runt torches". It was not until 1837 that jack-o'-lantern appeared as a term for a carved vegetable lantern... The term jack-o'-lantern originally meant a night watchman, or man with a lantern, with the earliest known use in the 1660s in East Anglia; and later, meaning an ignis fatuus or will-o'-the-wisp.