"Falling off the end of the earth" nonsense 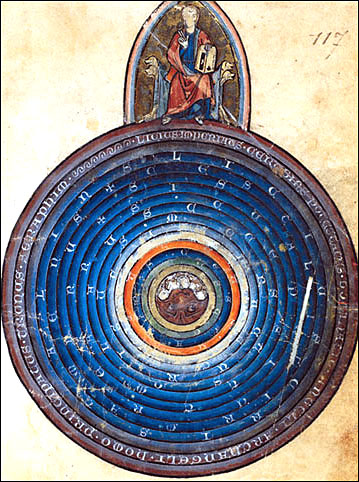 Earth at the center of the Spheres.
in Gossuin de Metz, L'Image du monde.
13th-century Copy.

"Medieval Europeans, even the most learned of geographers among them, are to this day often described as having believed that the world was flat.  But this simply isn't true.  Thanks in large part to the labors of Arab astronomers and mathematicians, ancient Greek proofs of the earth as spherical had survived into the Middle Ages and were circulating in Europe - and at some point early in the thirteenth century an English scholar known as John of Holywood, or Scrobosco, laid them out in an astronomical treaise appropriately titled The Sphere.  For centuries afterward the work would be taught and studied in schools and universities around Europe..."  [Among other arguments, Sacrobosco cited mariners' experience of seeing distant land from the top of a ship's mast, and different sets of stars visible at various latitudes.]

---excerpted from Toby Lester's The Fourth Part of the World

I am recurrently annoyed when I encounter descriptions of Columbus' crew being fearful of falling off the end of the earth because that is such a total misrepresentation of the worldview of the time.  It has been said that no educated person since the 3rd century believed the world was flat, and even uneducated persons could see the shape of the earth during eclipses of the moon.  Sailors probably knew of the earth's curvature better than anyone.

Columbus' crew may have been fearful and unruly, but not because of any fear of an edge to the earth.  They were concerned because they were sailing south - into the "torrid zone" - where they thought the heat might evaporate the water to render the seas too shallow for their ships.  They also may have been concerned that a westward voyage to reach the Indies was impossible because they didn't have enough food and water to cover such a distance (and they were correct - they didn't have enough provisions for a voyage to Asia and would in fact have died had they not bumped into the Americas).

But they never feared sailing off the end of the world.

Addendum: Conor also points to the Farnese statue of Atlas, which depicts him holding a globe on his shoulders, and which dates from the 2nd century A.D.  [photo at left from Globalization Prehistorica: Maps that Change History website, which has some interesting info and illustrations].

Second addendum:  Anon points out that the globe held up by Atlas represented the heavens, not the earth.