The last Monarch of the year 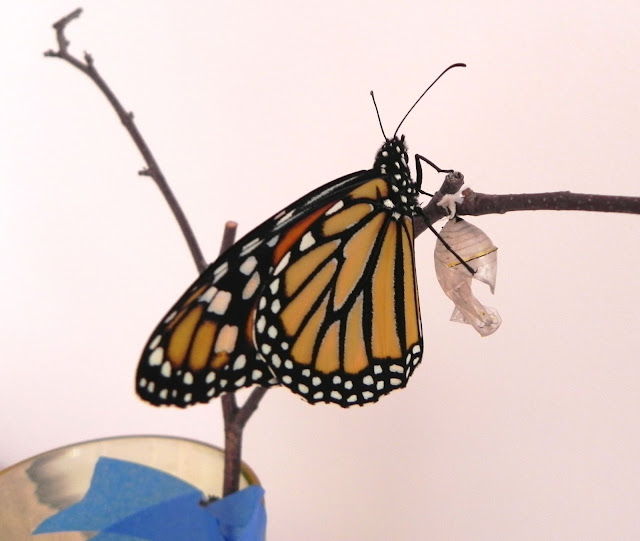 We found the egg on one of our milkweed plants VERY late in the season, which put the little critter at increased risk, because Monarchs are susceptible to a parasite called Ophryocystis elektroscirrha, which becomes more widespread in the environment as the summer passes.

After this catepillar hatched, it had a healthy appetite, got to a good size, and then pupated.  But the metamorphosis inside the chrysalis seems to be to a certain extent temperature-dependent (presumably the cooler temps slow the enzymatic processes), and early October this far north means very cool nights.  Her metamorphosis was VERY slow, and we weren't certain that she would eclose before frosty weather arrived.

We were delighted when we finally could see the wing pattern developing inside the chrysalis, and yesterday morning she popped out.  (In the photo you can see we remove the chrysalis from the rearing container and use dental floss to tie it to a small twig, which is secured in a drinking glass with adhesive tape.  This arrangement gives the newly eclosed butterfly more room to hang upside-down and fill her wings and harden them up - and it also makes the process easier to view by us and by neighborhood children).

She eclosed really early in the morning, already had her wings firmed up, and had dumped her meconium by the time we found her.  The next step was to move her to a sunny spot on the screen porch where she could soak up some solar energy: 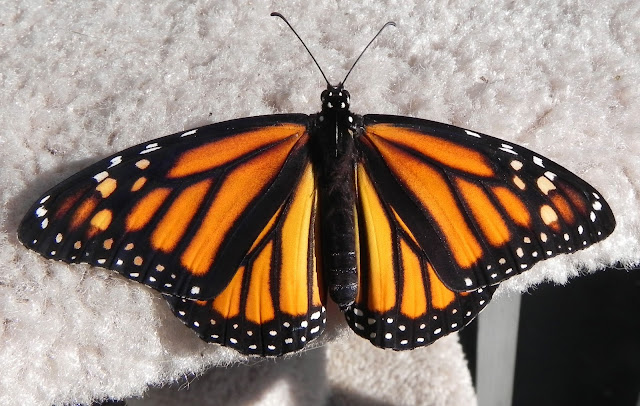 The coloration of newly-emerged Monarchs is intense (click for bigger) and always impresses us.  She was perfect in every way, and showed no visible signs of any of the OE parasites.  Her body was plump, as expected from her big appetite as a caterpillar, and she'll need all of that energy if she's to be successful for the next stage of her life - flying to Mexico for the winter:

Here in the Midwest, early-season Monarchs are true ephemerals, living only long enough to reproduce another generation.  But these late-season ones cannot overwinter, so they have to follow a migratory path that their ancestors have travelled for milennia, to return to the mountains of central Mexico for the winter.  I believe this generation is also metabolically different, having some ability to convert acquired nectar into fat stores for the journey and estivation.

I am just in awe of these creatures.  The metamorphosis itself - from caterpillar to butterfly - enchants every schoolchild (and the child in me).  And then the fact that a creature with a brain as small as that of an American politician is able to find its way from Wisconsin to Mexico just boggles my mind.

When we saw her taking test flights in the screen porch, we carried her out to the deck.  She lifted from my fingers, rose vertically beyond the shadow of the house into the sunlight, and turned to the south.