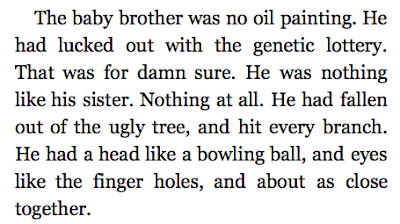 
Lee Child [author of the sentences above] is British, but in my experience of his novels, he seems to have a good command of American idioms. This time, though, I think that he's gotten one backwards...

Child seems to have [his character] Reacher using luck out by analogy to baseball terms like "strike out", "fly out", "ground out", where the out part means that your outcome in the current trial is complete failure. On that analogy, luck out could mean "fail completely due to (bad) luck"...

Updated with this information from Superlinguo:


Over lunch with a few friends the other day it transpired there were two very different opinions about the meaning of the term ‘lucked out’ that divided the group. Half of us firmly believe that it is a good thing to luck out, while the other half thought that it was a very bad thing to luck out...

And this information from Merriam-Webster:


According to Harper 1985, luck out was commonly used during World War Ii in some such sense as "to meet with bad luck; run out of luck," as in describing a soldier who was a casualty of battle ("He lucked out") or a poker player who lost his chips. The Harper panelists are asked if they think that the newer sense of luck out, "to succeed because of good luck," has now superceded the older sense. Most of them vote yes, but 26 percent vote no.

More at the links.  For me, to "luck out" means to experience good luck.