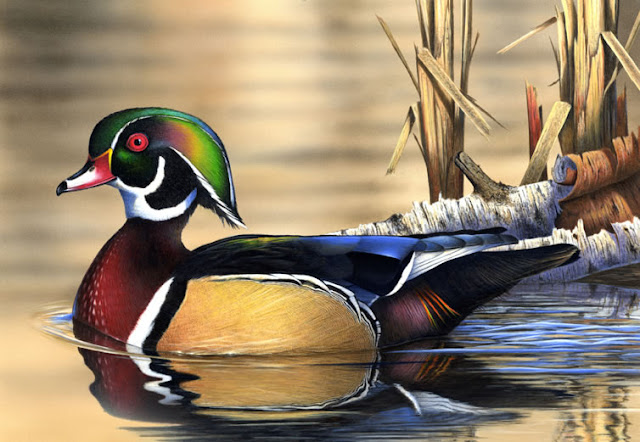 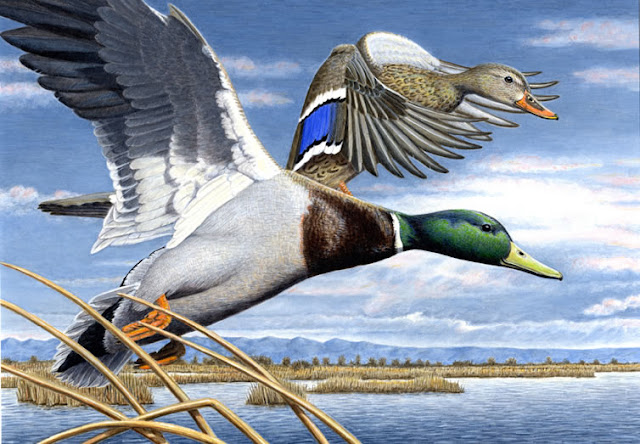 Two selections from a gallery of about 200 entries, posted at Outdoors Weekly:

The $15 Federal Duck Stamp is a vital tool for wetland conservation, with 98 cents of every dollar generated going to purchase or lease wetland habitat for the National Wildlife Refuge System. Since the stamp’s inception, sales have helped to acquire nearly six million acres of wildlife habitat at hundreds of refuges in nearly every state.

The Federal Duck Stamp art contest is the only art competition of its kind sponsored by the federal government. Since the first open contest was held in 1949, thousands of wildlife artists from throughout the nation have submitted art to the annual contest. While the winner receives no money from the federal government, the winning artist may benefit from the increased visibility and sale of prints and artwork.

Duck stamp contests always remind me of the scene in the movie Fargo* with Marge and Norm.  In real life, old duck stamps are quite valuable.  A 1934-2006 set of mint stamps is presently listed on eBay with a buy-it-now price of $5,495.

*(in the movie, Norm's primary competitor for the duck stamp contest are identified as "the Hautman's," who were real-life wildlife artists and friends of the Coens.  One confusing thing, though, is that in the movie Marge consoles Norm because his entry was selected for a "low-denomination" stamp, which could not be a federal waterfowl stamp.)