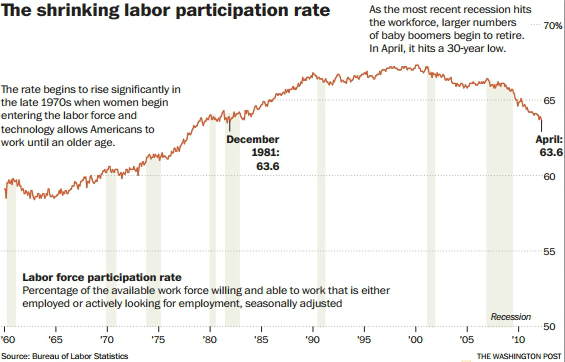 One reason "unemployment" percentages are improving is that we are now entering the phase where many of the "baby boomers" are retiring and not maintaining (or seeking) employment.  So even while fewer jobs are being created, the percent unemployed can fall.  Understanding this is crucial to an intelligent discussion of the economic forces.  Here are some excerpts from the Washington Post article:


In April, the U.S. economy added a mere 115,000 jobs, according to Bureau of Labor Statistics data released Friday. In a normal month, that would not even be enough to keep up with new entrants into the labor market. But in this economy, it was enough to drive unemployment from 8.2 percent down to 8.1 percent, the lowest point since January 2009.

The explanation is a little-watched measure known as the “labor force participation rate.” That tracks the number of working-age Americans who are holding a job or looking for one. Between March and April, it dropped by 342,000. But because the official unemployment rate counts only those workers who are actively seeking work, that actually made the unemployment rate go down.

Critics of the Obama administration have been quick to seize on this as the real reason for the falling unemployment rate. In February, the Republican National Committee released a research note on “The Missing Worker,” arguing that “over 3 million unemployed workers have called it quits due to Obamanomics.”

Economists say the story is considerably more complicated. For one thing, the trend predates President Obama. And while part of the story is clearly that the labor force is shrinking because the bad economy is driving workers out, another significant factor is that baby boomers are beginning to retire early — a trend that has worrying implications for future growth.

Some of them become bloggers... More at the link.