I totally agree with this conservative political commentator 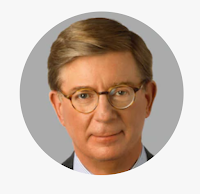 Some prefatory comments for readers not living in the U.S.:
George Will is a famous and highly respected conservative political commentator, a Pulitzer Prize winner, a former editor of William F. Buckley's National Review in the 1970s, and a former contributor and analyst for ABC News, NBC News, and Fox News.  Here are excerpts from his op-ed piece today in the Washington Post.  (boldface mine)


This unraveling presidency began with the Crybaby-in-Chief banging his spoon on his highchair tray to protest a photograph — a photograph — showing that his inauguration crowd the day before had been smaller than the one four years previous.  Since then, this weak person’s idea of a strong person, this chest-pounding advertisement of his own gnawing insecurities, this low-rent Lear raging on his Twitter-heath has proven that the phrase malignant buffoon is not an oxymoron

Presidents, exploiting modern communications technologies and abetted today by journalists preening as the “resistance” — like members of the French Resistance 1940-1944, minus the bravery — can set the tone of American society, which is regrettably soft wax on which presidents leave their marks. The president’s provocations — his coarsening of public discourse that lowers the threshold for acting out by people as mentally crippled as he — do not excuse the violent few. They must be punished. He must be removed...

The nation’s downward spiral into acrimony and sporadic anarchy has had many causes much larger than the small man who is the great exacerbator of them. Most of the causes predate his presidency, and most will survive its January terminus. The measures necessary for restoration of national equilibrium are many and will be protracted far beyond his removal. One such measure must be the removal of those in Congress who, unlike the sycophantic mediocrities who cosset him in the White House, will not disappear “magically,” as Eric Trump said the coronavirus would. Voters must dispatch his congressional enablers, especially the senators who still gambol around his ankles with a canine hunger for petting...

Those who think our unhinged president’s recent mania about a murder two decades ago that never happened represents his moral nadir have missed the lesson of his life: There is no such thing as rock bottom. So, assume that the worst is yet to come...