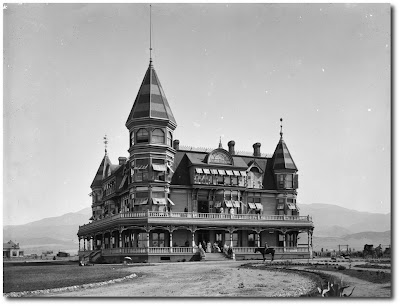 Photograph of the exterior of the front of a grand hotel in Beaumont, "The Beaumont", ca. 1895. The ornate three-story, wooden Victorian building has three visible towers whose pointed apexes are shingled in horizontal stripes. Balustrades run the around the perimeter of the building on both the First and Second floor. Nearly all of the many shutters have been folded up and out to allow air to circulate more easily through the building. Fifteen people are visible standing, sitting, or laying on the various porches, balconies, or in the front yard. One of the men is sitting on a horse. Two people sit in a horse-drawn wagon in the garden at right. Several houses are visible in the background at left. Mountains rise in the distance.

It looks very much like the Hotel Edinburgh on this old postcard.  Click photo to enlarge the building.

Text and photo from uɐɯǝʌɐɔ's photostream, via Bygone Years, via.