The Monarchs have arrived in Wisconsin 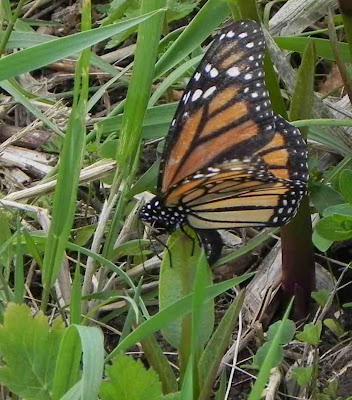 Yesterday I captured this image of a female ovipositing on a newly-sprouted milkweed.  When you see a butterfly visiting a non-flowering plant, it's obviously not nectaring.  It may be basking in the sun to recharge its solar batteries, or, as in this case, depositing eggs.  Monarchs curl the abdomen down briefly to just touch the plant and place a single egg. 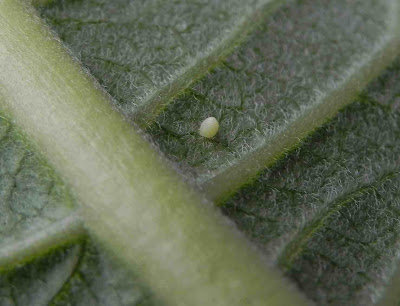 from the plant.  And since the sap is relatively toxic to most insects, it probably looks less attractive.

These photos were taken at the edge of a field which a farmer is in the process of enlarging to accommodate a larger corn harvest.  Unfortunately, he has extended it into a patch of milkweed that has been growing there for a long time (it takes several years for a milkweed to build up a root system sufficient to support a flowering several-foot-tall plant). 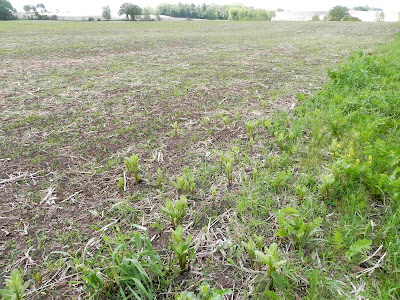 He tilled the field a couple weeks ago.  The milkweed are sprouting right on schedule, but they are doomed because he will be back to plant the corn quite soon.  The milkweed will get disced under at that time and likely not resprout.  This is sadly representative of what is going on around North America, as traditional Monarch (and other butterfly) habitat is lost to agriculture (and homebuilding).  I would encourage those of you who are interested (and blessed with a yard/garden) to consider growing plants that support butterflies either as food for their caterpillars or as flowers for their nectar.