The mystery of portolan charts 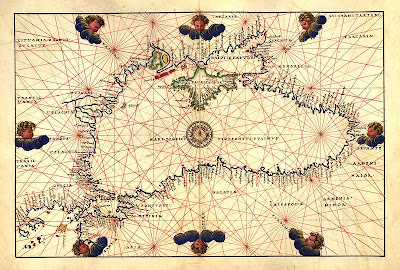 ... one of the world's greatest and most enduring mysteries: Where and how did medieval mapmakers, apparently armed with no more than a compass, an hourglass and sets of sailing directions, develop stunningly accurate maps of southern Europe, the Black Sea and North African coastlines, as if they were looking down from a satellite, when no one had been higher than a treetop?

The earliest known portolan (PORT-oh-lawn) chart, the Carta Pisana, just appears in about 1275 -- with no known predecessors. It is perhaps the first modern scientific map and contrasted sharply to the "mappamundi" of the era, the colorful maps with unrecognizable geography and fantastic creatures and legends. It bears no resemblance to the methods of the mathematician Ptolemy and does not use measurements of longitude and latitude.

And yet, despite it's stunning accuracy, the map "seems to have emerged full-blown from the seas it describes," one reference journal notes. No one today knows who made the first maps, or how they calculated distance so accurately, or even how all the information came to be compiled.

"The real mystery is that if you took all the notebooks from the sailors used in making these charts, along with the coordinates and descriptions," Hessler says, tapping the glass that covers the ancient vellum, "you still couldn't make this map."

"The ancient Greeks and Romans had traditions of map-making, there's Ptolemy, and there's a line of progression," Hessler says. "But here, it just explodes out of nowhere. It appears to be a true invention of the Middle Ages."

The maps usage began to come to an end during trans-Atlantic exploration. For all their regional accuracy, the mapmakers did not know how to calculate for the curvature of the earth on a flat map. Across the Mediterranean, they could take you from port to port because the distances were comparably small. Over the distance of the Atlantic, if you set out for modern-day Miami, you'd wind up on Long Island.

Still, they were reliable guides to the known world for 400 years, and they have concealed the secrets of their origins and methods for another four centuries, leaving the answers to the realm of novelists and storytellers.

Text from an article at the Washington Post re a Library of Congress conference on the origins of portolan charts.

Image: 1544 Map of the Black Sea from the Portolan Atlas Dedicated to Hieronymus Ruffault, Abbot of St. Vaast.