Mark Twain's autobiography to be published 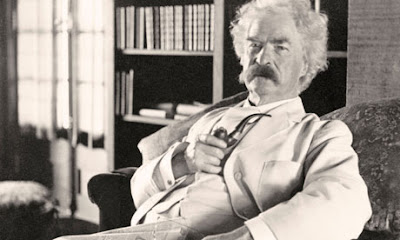 Twain had specified that his autobiography remain unpublished for a century after his death, to ensure that he felt free to speak his "whole frank mind", knowing that when his "Final (and Right) Plan" for relating the story of his life was eventually published, he would be "dead, and unaware, and indifferent". The author passed away on 21 April 1910, and this November, the University of California Press will publish the first volume...

Running to half a million words, the trilogy of books will cover Twain's relationship with his secretary Isabel van Kleek Lyon, his religious doubts and his criticisms of Theodore Roosevelt, according to the Independent.

I'm looking forward to reading this set of books.  Those who are familiar only with his jumping frogs and boys on river rafts should read The War Prayer (also published after his death) or Letters From The Earth (published despite protests from his family) to get ready for this autobiography.