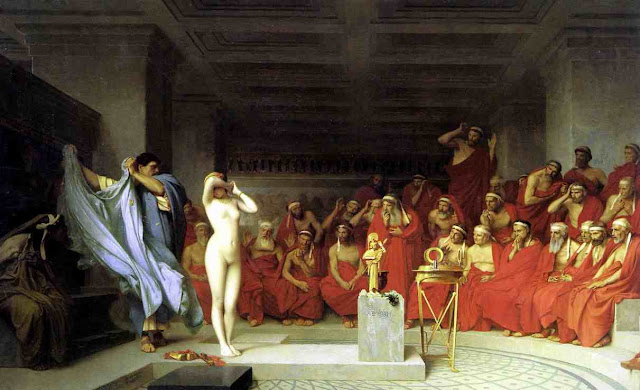 I found the photo of this painting at Consciousness is a Congenital Hallucination (via Suddenly), but wasn't familiar with the story depicted.  She was a famously beautiful courtesan in ancient Greece...


Her real name was Mnesarete (Ancient Greek Μνησαρετή (commemorating virtue)), but owing to her yellowish complexion she was called Phryne (toad), a name given to other courtesans...

When accused of profaning the Eleusinian mysteries, she was defended by the orator Hypereides, one of her lovers... When it seemed as if the verdict would be unfavourable, Hypereides tore open her robe and displayed her breasts, which so moved her judges that they acquitted her. According to others, she herself removed her clothing. The judges' change of heart was not simply because they were overcome by the beauty of her nude body, but because physical beauty was often seen as a facet of divinity or a mark of divine favor during those times.