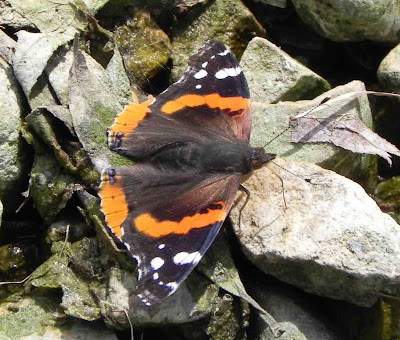 I encountered this Red Admiral at our local fish hatchery last month; another one has been patrolling our back yard, even though there don't appear to be any nettles nearby to use as a food plant.

I learned something about this butterfly's name this week:


Contrary to what you might think, the name of the Red Admiral is not naval in origin. It is not even rank oriented. It is shortness-of-phrase oriented. This is another one of those butterflies which are distributed globally over North America and Eurasia. In England, where it was first described, it was originally called the Red “Admirable” butterfly due to its striking appearance. Apparently American folks got tired of saying “admirable” and reduced the name by a syllable to “admiral”.