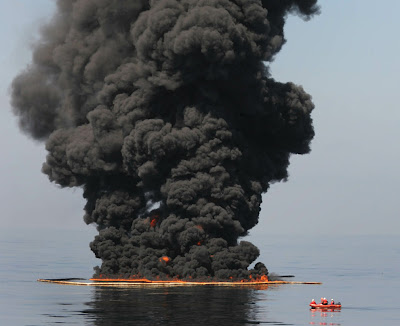 Oil burns during a controlled fire May 6, 2010 in the Gulf of Mexico. The U.S. Coast Guard is overseeing oil burns after the sinking, and subsequent massive oil leak, from the sinking of the Deepwater Horizon oil platform off the coast of Louisiana. (Justin E. Stumberg/U.S. Navy via Getty Images).

I'm familiar with "controlled burns" from prairie restoration projects.  It's amusing to see the same term applied in this situation.  I suppose they mean the fire is not going to spread anywhere, but to call it "controlled" is a bit of a stretch.

Photo from Boston.com's The Big Picture.