Here in the Midwest, you can see lots of glacial landforms as you drive rural roads (or Interstates).  I've always been fascinated by tall drumlins and moraines.  Some on public land can be climbed; others are inaccessible private property.  This past week I had an opportunity to explore one just north of the Madison area.

Empire Prairies State Natural Area is a set of three Wisconsin DNR-managed remnant prairies, one of which is called the Westport Drumlin.  The topography of the drumlin is such that it has NEVER been farmed, and thus is home to a variety of native plants that are difficult to find elsewhere.


Oriented on a northeast to southwest-oriented glacially sculpted ridge is Westport Drumlin Prairie -- a small but diverse prairie containing more than 100 native plant species. A small area of oak opening, with open-grown bur oaks, occupies the western point of the ridge. Although the drumlin wears a thin mantle of glacial till, as evidenced by rounded boulders scattered about, limestone bedrock fragments and small outcrops at the drumlin’s summit attest to the limited terra-forming action of glacial ice on this ridge. Several showy plant species are present including pasque flower, cream wild indigo, rough blazing-star, yellow coneflower, shooting-star, bird’s-foot violet, compass plant, rosinweed, goldenrods, and asters....

The opportunity to visit was afforded by the Madison Chapter of The Wild Ones, in conjunction with the Good Oak Ecological Services restoration consultants, who provided a knowledgeable leader for the venture.

Access to the drumlin was not as easy as the top photo might suggest, because it is surrounded by private farmland which is actively managed, and there are no cleared or marked trails to access the landform.  We were extremely fortunate that our visit coincided with a) the corn having already been planted and sprouted, so we could traverse a field without stepping on or being impeded by the crop, and b) the hayfield (top photo) having just been cut, because the alternative would have been to follow the treeline between fields, where you know the farmers for the last century have been dumping the large rocks from the fields; it would have been a difficult trek. 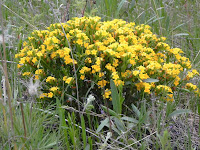 As we reached the ridgetop, we were surrounded, even at this relatively early point in the season, by a wide variety of wildflowers.  The presence of large clumps of hoary puccoon (left) was testimony to the virgin nature of the landscape, because the plant is difficult to propagate artificially.   A lot of the unique flora was just emerging, but one notable one was already past its peak.  Pasqueflower (Pulsatilla) is an uncommon perennial that is one of the first flowers to bloom in the spring (typically around Easter - hence the "passion" flower designation).  I have walked the UW Arboretum each spring trying to spot the elusive blooms.  Here atop the drumlin we were surrounded by a sea of pasqueflowers going to seed: 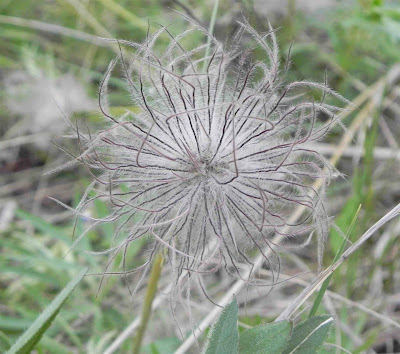 At the very crest of the drumlin we followed a footpath that has been shared by wildlife and humans certainly for centuries.  Because the drumlin affords a vantage point for spotting wildlife in the surrounding area, it must have been a favored location for the earliest humans to settle here after glacial retreat, and would have been a strategic location for Native American hunters; I have no doubt that lots of points and shards and flakes could be found in the soil.  There were several holes in the drumlin large enough to accommodate a coyote, though no evidence of recent digging. 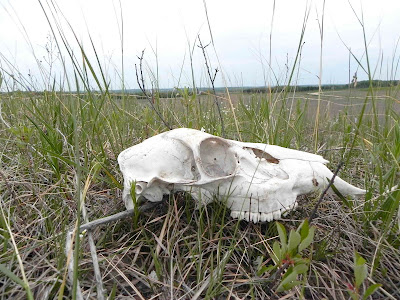 The skull was picked clean and sunbleached; I don't know the species.  An elderly lady who joined us for the field trip suggested it was probably from a deer.

The drumlin will be revisited by this group on August 12, when the autumn wildflowers should be maxing out.  Those in the  Madison/south-central Wisconsin area interested in that trip or in other future walks might want to bookmark this link.