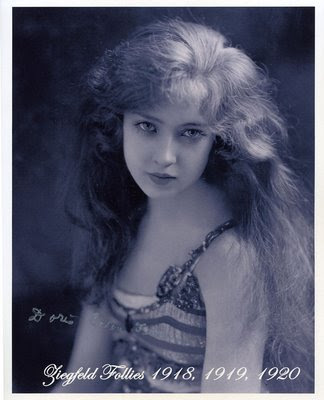 
She began performing onstage as a young child, and made her Broadway debut at the age of 13. A year later, in 1918, she joined the famed Ziegfeld Follies as the youngest Ziegfeld Girl ever cast in the show. She continued to perform in stage productions and silent films throughout the 1920s and early 1930s.

In 1911, [she and her] sisters were hired for a production of Maurice Maeterlinck's fantasy play The Blue Bird at the Shubert Belasco Theatre in Washington. While Eaton had a minor role in the show, as a sleeping child in the Palace of Night scene, it marked the beginning of her career in professional theatre...

That is an interesting coincidence, since the costumes for The Blue Bird were previously featured in a post at TYWKIWDBI.