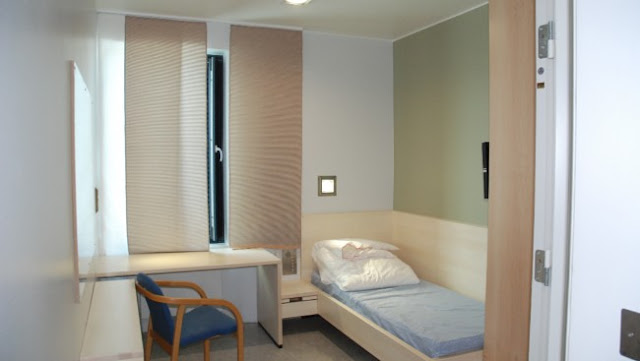 
"I don't suppose the prisoners have access to the internet," I say. Leif looks at me. "But of course," he says. And in their cells? "Yes." Leif explains that firewalls have been set up to ensure security is maintained. "But they must be able to access the internet," he says, "to help in their education and also so that they know they are still connected to the world."

This week the Norwegian site nrk has a report on the new Halden prison, the photogallery from which has been reposted at Izismile in an easier-to-view format.  Elusive Moose reports on the conditions faced by the prisoners:


The brand new facilities include a gym, a training room, a sound studio, a chapel, a library, several workshops, a family visiting unit, a football pitch and a school, where inmates will get the opportunity to study and gain a range of professional qualifications aimed at facilitating their release into society.

The cells themselves are bright, and are arranged in small units of 10 and 12 cells, joined to a common living area, where inmates will prepare food and socialise in very much the same way they would in any communal building. All cells have flat screen TVs and en-suite bathrooms, and some kind of view – what’s more, the windows don’t have iron bars.

Now, contrast that to American prisons:


At least 60,500 federal and state prison inmates were sexually abused at their current facility in the preceding year alone, according to a 2007 nationwide study by the Bureau of Justice Statistics (BJS)...

Disturbingly, many corrections officials continue to deny that sexual abuse is a problem in their facilities. Such indifference is reinforced by misguided public perceptions that prisoner rape is inevitable, or, even worse, a joke...

These comments come from an excellent editorial entitled "It's Time to End the Epidemic of Prisoner Rape."