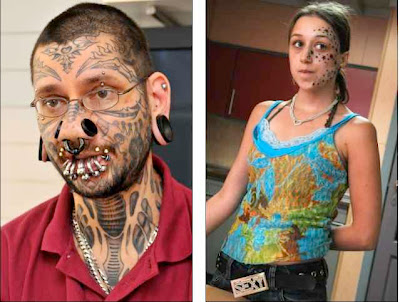 ... now here's one of the tattoo artist.

Details at the Daily Mail.

Update June 23: She has confessed that she was awake the entire time, lied about it and started to sue the tattoo artist because her father was angry with her. Details in the Telegraph this morning:

Mr Toumaniantz... had consistently denied he had made a mistake and always insisted Vlaminck wanted all 56 stars. "I maintain that she absolutely agreed that I tattoo those 56 stars on the left side of her face."

But despite insisting she had asked for 56 stars, he still initially agreed to pay for half of the treatment to remove the tattoos.

He said: "Kimberley is unhappy and it is not my wish to have an unsatisfied client."

"I don't regret it. To tell you the truth, this has given me some publicity." Mr Toumanaintz is now said to have withdrawn his cash offer and said from now on he will get written consent from clients before he begins tattooing.