This is not a monarch butterfly 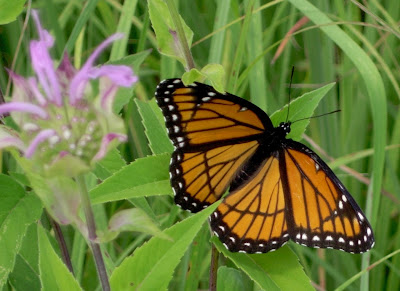 For many (?most) people, the sight of a large orange butterfly prompts an automatic identification as a "Monarch," and depending on where you live that will probably be the most likely answer. But there are several other possibilities, including queens and fritillaries. The one above (photographed at Cherokee Marsh State Natural Area) is the Viceroy, and it has an interesting story of its own.

The caterpillars of Monarch buterflies feed on milkweed plants; in doing so they incorporate into their bodies the toxins present in the plant. Both the caterpillar and the adult Monarch are unpalatable to predators; when a young bird is presented with a Monarch, it will eat it and then violently regurgiate it. If it is then offered another Monarch, it will studiously avoid it.

Monarchs flaunt their toxicity. They display bright coloration, and when they fly it is with a powerful, but leisurely, soaring flight. This aposemitism is the opposite of the "crypsis" that most creatures use to hide from detection.

Generations of young naturalists have been taught that the Viceroy exhibits classical "batesian" mimicry: sometime in prehistory the edible ancestors of modern Viceroys that looked most like Monarchs were spared from predation, thus favoring the evolution of coloration and wing patterns like the Monarchs.

It is now known that Viceroys are also unpalatable. The caterpillars feed primarily on willow plants, which are sources of salicylic acid (aspirin), which they sequester in their bodies and retain as they become butterflies. The physical resemblance of the two butterflies is an example of Mullerian co-mimicry, in which each benefits from the toxicity of the other as well as their own.

Viceroys are widespread (map here) and relatively common if you know what to look for. You can identify them on the wing because their flight is more jerky and less majestic than the monarchs, but the most definitive distinction is the wing pattern. Note in the top photo that the hindwings are crossed by a black line; it looks like a "smiley face" (I think of it as the letter "V" for "Viceroy").

The monarch (photo below) has no such line. The monarch below also exhibits the two small black "balls" or dots on the hindwing that mark him as a male. These are the androconial patches that release pheromones to attract females. I think it must be a bit unusual in the animal/insect kingdoms for the males to release the sexual pheromones; it seems it is usually the female of the species that does that. 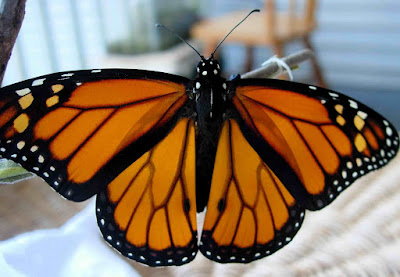