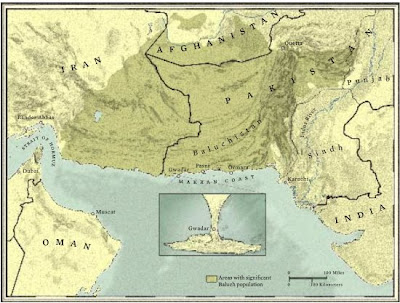 In May I suggested that readers get to know Balochistan/Baluchistan*, linking to an article in Asia Times citing the regions immense natural resources and its complicated political landscape. Now an article in The Atlantic provides additional information on the latter aspect.

The area has historic ties to Iran, Afghanistan, and Oman, but was incorporated into Pakistan when the latter was created in 1948. Robert Kaplan's article in The Atlantic explains some of the ongoing tension, focusing on the geographically unusual but strategically crucial peninsula where the port city of Gwadar is located (map above).

In June 2008, The Herald, a respected Karachi-based investigative magazine, published a cover story, “The Great Land Robbery,” alleging that the Gwadar project had “led to one of the biggest land scams in Pakistan’s history.” The magazine detailed a system in which revenue clerks had been bribed by elites to register land in their names; the land was then resold at rock-bottom prices to developers from Karachi, Lahore, and other major cities for residential and industrial schemes. Hundreds of thousands of acres of land were said to have been illegally allotted to civilian and military bureaucrats living elsewhere. In this way, the poor and uneducated Baluch population had been shut out of Gwadar’s future prosperity. And so, Gwadar became a lightning rod for Baluch hatred of Punjabi-ruled Pakistan...

According to the International Crisis Group, “The insurgency now crosses regional, ethnic, tribal and class lines.” Helping the Baluch, the Pakistanis say, have been the Indian intelligence services, which clearly benefit from the Pakistani armed forces’ being tied down by separatist rebellions. The Pakistani military has countered by pitting radical Islamic parties against the secular Baluch. As one activist mournfully told the International Crisis Group, “Baluchistan is the only secular region between Afghanistan, Iran and Pakistan and has no previous record of religious extremism.”

The Baluch amount to less than 4 percent of Pakistan’s 173 million people, but Pakistan’s natural resources, including copper, uranium, potentially rich oil reserves, and natural gas, are mostly found in Baluchistan...

“The Punjabi army wears uniforms, but the soldiers are actually terrorists,” he continued. “In Gwadar, the army is operating as a mafia, falsifying land records. They say we don’t have papers to prove our ownership of the land, though we’ve been there for centuries.” Baluch told me he was not against development, and supported dialogue with the Pakistani authorities. “But when we talk about our rights, they accuse us of being Taliban..."

“If we keep fighting,” he told me gently, “we will ignite an intifada like the Palestinians’. It is the cause of my optimism that the young generation of Baluch will sustain a guerrilla war. Pakistan is not eternal. It is not likely to last. The British Empire, Pakistan, Burma—these have all been temporary creations.

More at the link. I'll also take this opportunity to commend The Atlantic. I have subscribed to the hard copy version for longer than I can remember, typically reading it cover to cover. The contents are as varied as this blog itself is. What makes The Atlantic special is their progressive decision to make essentially the entire contents of the magazine available online - for free, properly formatted, with photos and illustrations.

If you like the content of TYWKIWDBI, you owe it to yourself to check out The Atlantic either online, or by subscription, or from your library.

*(both spellings are commonly used)