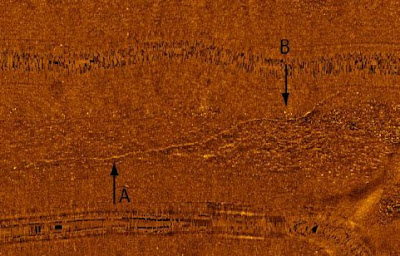 Above: Sonar image of the bottom of Lake Huron 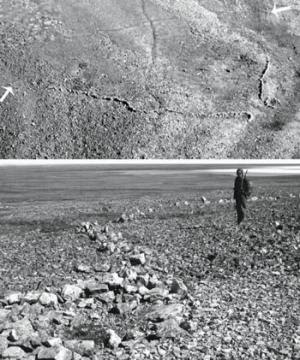 Above: Caribou drive lanes in the Canadian Arctic

Nearly 10,000 years ago, 50 metres beneath the surface of what is now North America's Lake Huron, hunters set an ambush. Caribou were herded through stone corridors towards archers that lay waiting behind low parapets.

No bones or drawings have been found to tell this ancient tale. Instead sonar mapping has given researchers detailed views of the lake floor, which flooded 8000 years ago, preserving a Pompeii-like snapshot of local human history.

John O'Shea and Guy Meadows of the University of Michigan say that when the huge Laurentide ice sheet melted and flooded the basin, it potentially preserved intact Native American sites – which are rare in the Great Lakes region. "The waters of Lake Huron playing a role similar to the mud and clastic debris at Pompeii," says O'Shea.

The excerpt is awkwardly phrased; the hunters did not of course set an ambush underwater - they set it on land, and that land is now covered by Lake Huron. More details at the New Scientist.

These are not the same as the stone fishing weirs sometimes found in lakes, streams, and even ocean shores, though the basic principle is similar.